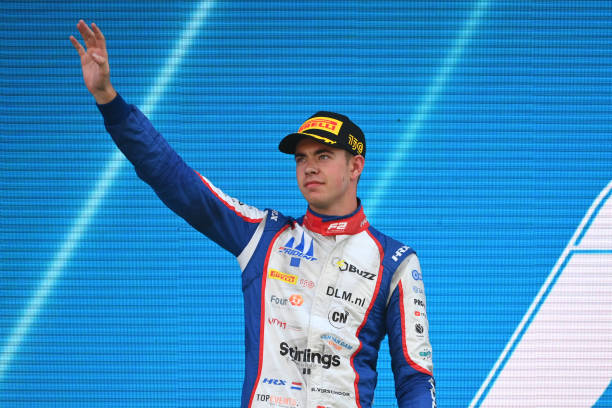 ZANDVOORT, NETHERLANDS - SEPTEMBER 04: Second placed Richard Verschoor of Netherlands and Trident (20) celebrates on the podium during the Round 12:Zandvoort Feature race of the Formula 2 Championship at Circuit Zandvoort on September 04, 2022 in Zandvoort, Netherlands. (Photo by Dan Mullan/Getty Images)

The Dutch driver won the first race of the season, and has learned a lot since then

Trident’s Richard Verschoor has been on a run of seven points finishes in a row, including a podium at his home race in the Netherlands.

The Dutch driver’s Formula 2 campaign has been anything but simple, but he’s almost done with his second season. With a win and two second places under his belt in 2022, Verschoor feels like he’s gained confidence during his journey in this category.

Verschoor’s rookie year was tricky, as he didn’t have the funding to keep a full-time seat in 2021. He raced for MP Motorsport until Sochi, and then was forced to sit out for a round. But he returned for the final round of the season, replacing an injured Enzo Fittipaldi at Charouz Racing System.

During the break, Verschoor negotiated with sponsors and teams, doing all the work to secure himself a seat at Trident for 2022. It turned out to be a good signing, and Verschoor took victory at the very first race of the year in Bahrain.

He went on to finish fifth the following round in Jeddah, before taking another podium in the Feature Race. Things were looking good.

But that podium was followed by a run of point-less races, and Verschoor went without a top ten finish for the next three rounds. Then he finished fifth in the Feature Race at Baku, and in Austria he had his best weekend yet. Verschoor finished sixth in the Sprint and then took the Feature Race win. Unfortunately, after the team couldn’t provide an adequate fuel sample for the car, he was disqualified from the race and lost his win.

Nearing the end of the season, Verschoor has been consistently scoring good points. Starting with eighth place in the Feature Race in Hungary, Verschoor has finished in the top nine in every single race. Speaking to Formula 2, he talked about how he feels that he’s shown himself this season better than last year.

“My goal was to show myself more than what I did last year, where I had some good races, but it didn’t pan out exactly how I wanted it to. We haven’t scored as many points as we could have, but in terms of showing myself, I think it’s been a strong year for that.

“Especially at the beginning of the season, in the last four years Trident didn’t finish on the podium often, so I’m happy that this year we can show that we can do that. Also, for myself as a driver, to show this with a team that is not used to being on the podium regularly of course it’s even better.”

It’s not been an easy season for Verschoor or Trident. But working with the team has been good for him, and he believes that they’ve continued to grow throughout the season.

“I think the highs and lows make you one team,” he said. “When there are highs, everything is nice and everybody is happy, but then you also have the lows where the team or driver makes mistakes, that’s where you really get to know someone.

“I think with all that’s been happening this season, we’re really growing as a team, and I feel that we’re even stronger now than what we were at the beginning of the season.”

Verschoor is in a unique situation, in that he does all of his management and sponsorships by himself. On the current Formula 2 grid, Ralph Boschung is the only other driver who also does this.

It’s a lot of extra work, as most drivers have managers or Formula 1 academies who do most of the work on that front. Verschoor admitted that it has hindered him in his development and made progressing as a driver more difficult.

“I feel a lot more confident now. My route towards Formula 2 hasn’t always been the easiest but I think now I’ve really started to learn how to extract the best out of myself. As a driver, I never really had much support from managing, to sponsors, to driving – I did everything myself. I had to learn a lot, which I think is why it took me a little bit longer to be at my highest level.

“One thing I learnt is that in the end, you’re always on your own. You have to be strong on your own because if you really want something that bad, you have to work for it yourself, no one else is going to do it for you.

“Whether it’s being quick on track or with sponsorship, if you don’t do anything, nothing will happen. It sounds cliché, but it’s actually true. This is something that I experienced, and you should never give up on your dream.

“Last year I wouldn’t have said it, but at the moment I’m very proud. I’m feeling very happy, very confident. I’m enjoying it here. I would love to stay, let’s see what the future brings…”

There is one round left of Formula 2, taking place in Abu Dhabi at the end of November.