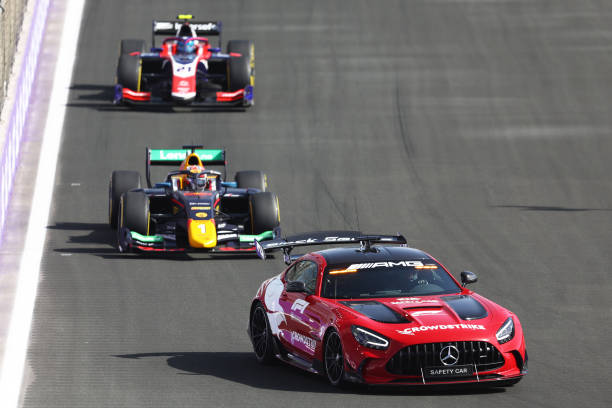 JEDDAH, SAUDI ARABIA - MARCH 26: The FIA Safety Car leads Dennis Hauger of Norway and Prema Racing (1) and the rest of the field during the Round 2:Jeddah Sprint Race of the Formula 2 Championship at Jeddah Corniche Circuit on March 26, 2022 in Jeddah, Saudi Arabia. (Photo by Clive Rose - Formula 1/Formula Motorsport Limited via Getty Images)

In F2’s first race at Jeddah, Prema’s Dennis Hauger lost the lead due to a strange mix up regarding the pit lane.

So, let’s walk through exactly what happened, and hear some thoughts from the drivers on whether or not it was fair.

The Sprint Race in Jeddah had very little racing, as over half of the 20 laps took place under the safety car. One of the big incidents that occurred was after the first safety car restart. Logan Sargeant and Jack Doohan collided with each other on the start/finish straight before even crossing the line.

This was the incident that brought out the second safety car. At this point, Hauger still had a firm handle on the race lead, having started from pole. His team instructed him to follow the safety car through the pit lane, as that was the order from race control.

Hauger had broken both safety car procedure and entered the pits when they were closed. Therefore, he received a 10 second stop and go penalty. The insult added to injury dropped him to the back of the grid and he finished 16th; a disappointing end to what initially looked like his maiden Formula 2 win.

AUTOhebdo asked the top three finishers what they thought of the safety car procedure during the post-race press conference.

Race winner Liam Lawson made it clear that he thought the rules spoke for themselves. Although, he admitted the communications from race control were confusing.

Most of us got the call to initially drive through the pit lane, and we have boards right before the pit lane entrance that will display arrows if you need to go in the pit lane or a big X if you’re not meant to go in the pit lane. It was pretty visible that the X was there, so that was why none of us drove through. I’m not sure if Dennis didn’t see it or not. Obviously, it’s disappointing for him.”

Juri Vips, who finished second, agreed with Lawson about the clarity of the rules.

It’s a really tough lesson for Dennis. I think he did a great job and if I’m not wrong he was leading at that point as well. But yeah, you always follow the safety car whatever it does.”

After the race, Prema protested the result to the Stewards and asked that they change the race classification.

Race control heard the protest but dismissed the claims. The report stated that “the driver of Car 1 admitted that he saw the Pit Entry signs showed closed and pitted anyway at the direction of the team. He did not query the team again when he saw the closed signs.”

It’s unclear exactly what Prema wanted to achieve with this protest, as it wasn’t at all likely to be upheld. The final race classification remains the same, and Prema and Hauger will be hoping to avoid costly mistakes like this one in the future.