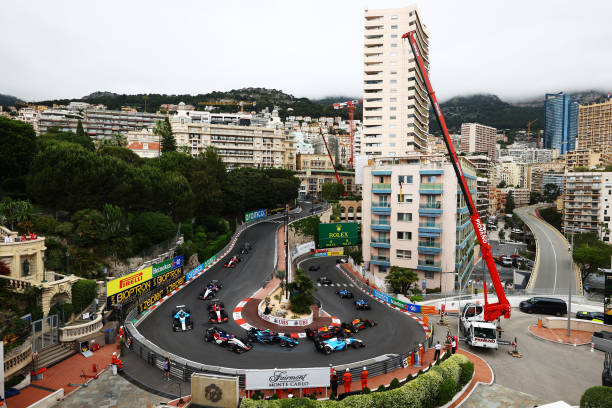 MONTE-CARLO, MONACO - MAY 22: A general view of the on track action during the Feature Race of Round 2:Monte Carlo of the Formula 2 Championship at Circuit de Monaco on May 22, 2021 in Monte-Carlo, Monaco. (Photo by Bryn Lennon/Getty Images)

It's time for Formula 2 to tackle one of the toughest tracks on the calendar.

Formula 2 is diving straight into preparation for Monaco this weekend, after racing in Barcelona. Some drivers are facing the daunting street circuit for the first time, while others have a little experience under their belts. But either way, it’s going to be challenging.

FormulaNerds caught up with the top three in Qualifying at Barcelona.  The drivers spoke about the upcoming Monaco Grand Prix and their expectations as both rookies and veterans.

All the rookies on the grid are new to the Circuit de Monaco and will be tackling one of Formula 1’s most challenging tracks with no experience.

Speedcafe asked Jack Doohan, Frederik Vesti, and Juri Vips about their thoughts ahead of the fifth round of the Formula 2 Championship.

“Monaco’s gonna be amazing,” said Doohan. “I haven’t driven there before. It’s going to be a really cool experience, I’m really looking forward to it. It has such an iconic circuit.”

As excited as the fast rookie and two-time polesitter in Formula 2 is, Doohan knows there isn’t a lot of time in between races to get up to speed.

“We’ll obviously start prep as soon as we finish here on Sunday afternoon,” he commented. Unlike a few of his fellow rookies, Doohan doesn’t have the benefit of having competed at the Macau street circuit.

Frederik Vesti, however, has raced at Macau and enjoyed it immensely. “I’m looking very much forward [to Monaco],” he told Speedcafe.

“It’s obviously a very historical track for Formula 1. I’ve done Macau in the past, and I’ve done Jeddah, so two street circuits, and they’ve both been amazing experiences, and I think that Monaco is going to take that to the next level.

The drivers making their first appearance at Monaco aren’t the only ones excited for this weekend. Juri Vips shared his thoughts on the Monaco circuit as he prepares to drive it for the second time this year.

“It’s a lovely track, definitely one of my favourites,” said Vips. The Red Bull junior will be looking to achieve a podium finish as he’s one of four returning drivers who finished on the podium last time out.

But speaking from experience, Vips mentioned in the press conference how mentally difficult a circuit Monaco is.

“It’s just a chaotic weekend, just driving there. I would say the worst is the Feature Race, because it’s mentally something very different compared to any other circuit, because you don’t have any real straights to rest. All the straights are still sort of turning and you have to pay attention. So mentally it’s like the toughest place to be. Especially the Feature Race, where you have to make a good gap to the people on the opposite strategy and push every lap. Qualifying as well is so high intensity compared to any other street track even.”

While the drivers on the grid have doubtless done many hours prepping in the simulator, what Vips mentioned isn’t exactly something you can prepare for. The returning drivers will have the upper hand this weekend, having been through it all before.

But while Vips claims Monaco is different to any other street track, it’s still safe to look out for rookies who have impressed at tracks like Macau in the past. Carlin’s Logan Sargeant, for example, finished on the podium at the Macau Grand Prix in 2019.

One thing is for sure: whether the Formula 2 drivers are returning to Monaco or making their debut at this famous track, everyone is looking forward to both an exciting and challenging weekend.