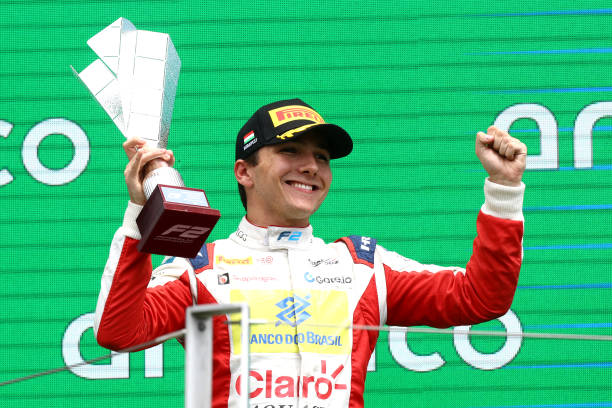 BUDAPEST, HUNGARY - JULY 31: Second placed Enzo Fittipaldi of Brazil and Charouz Racing System (22) celebrates on the podium during the Round 10:Budapest Feature race of the Formula 2 Championship at Hungaroring on July 31, 2022 in Budapest, Hungary. (Photo by Francois Nel/Getty Images)

The Brazilian driver scored a double podium at the Hungaroring

Enzo Fittipaldi has quietly but consistently been climbing the Formula 2 standings, and now sits fourth going into the break.

Fittipaldi finished on the podium in both the Sprint and the Feature races in Budapest. FormulaNerds caught up with the Brazilian after both of these races, and spoke with him about his season so far.

Fittipaldi’s Formula 2 journey began in 2021, when he was promoted from Formula 3 by Charouz for the final few rounds of the season. It was in Jeddah, the second to last round, when he collided with a stalled Theo Pourchaire at the start and sustained a fractured heel among other minor injuries.

While he managed to recover in time to race at the opening rounds of 2022, Fittipaldi told FormulaNerds after the Sprint Race in Hungary that he didn’t feel fully recovered until Imola.

“I think for sure this year has exceeded my expectations a little bit, because physically I wasn’t 100 percent in the first two rounds, and I’m sure if I was 100 percent I would have scored points there.

“The first two rounds were really difficult, and then we had the break, and then at Imola I was 100 percent. Right away I gained a couple tenths just by being physically in a better state.”

Fittipaldi scored his maiden podium in the Feature Race at Imola, making up 13 places to finish second.

In Hungary, Fittipaldi took his fourth and fifth podiums. FormulaNerds asked Fittipaldi how he feels he’s progressed throughout the season after the Sprint Race.

“For sure this year has been going really well,” he said. “I knew the potential was always there, and consistency has been everything for me this season, just finishing every race and trying to get as much knowledge and experience in the Formula 2 car, and to continue improving every weekend. That has been my goal for the start of the season, and it’s been going very well.”

Coming to the Hungaroring for Round 10 of the championship this past weekend, Fittipaldi qualified ninth.

Starting from second for the Sprint Race, Fittipaldi hung on to quickly degrading tyres to finish third behind Jack Doohan and Juri Vips.

The Feature Race on Sunday was a battle of tyre strategy. Fittipaldi, on softs, hung on longer than all the drivers in front of him, and then made a good pit stop to come out and eventually finish second.

“The tyres at that point were really bad,” Fittipaldi told FormulaNerds after the race. “The left front was completely dead but we were still really fast. I was a bit worried because I saw everyone in front of me box, and I told my team ‘I think we should box’ and my team said ‘no no, we’re gonna stay out.’

“I was worried, but even with the left front completely dead we had a really good rear axle so our lap times were still very competitive. I think honestly it was the right call, I think we boxed at the right time. One lap later would have been too late and one lap earlier would have been too early. Everything worked out smoothly for us.”

Fittipaldi also cited coming through traffic in the middle of the race as the hardest part of hanging on, saying: “For me the difficult part was really when we were going through the traffic, just managing as best as possible to not make mistakes, make the right overtake at the right time, and not destroy the tyres behind the traffic. That for me was critical in the middle of the race.”

An excellent weekend in Hungary puts Fittipaldi fourth in the standings headed into the summer break.

Currently he’s only 19 points behind former Formula 3 teammate and rookie Logan Sargeant. It’s clear to see the improvements he has made since the first couple of rounds of 2022, when he was still recovering from the crash at Jeddah.

While Felipe Drugovich and Theo Pourchaire lead the standings comfortably, Sargeant and Fittipaldi sit in third and fourth as two of the biggest surprises this season.

Fittipaldi has high expectations for the rest of the season, telling F1 Feeder Series after the Feature Race that he expects to get his maiden Formula 2 win in the next couple of rounds.