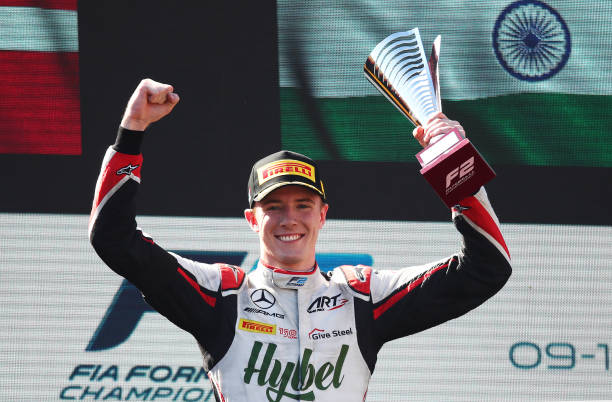 F2 Exclusive: Vesti reflects on his rookie season and hopes for 2023

The Danish driver is in the hunt for a top ten finish in 2022, and hopefully the title in 2023

ART Grand Prix’s Frederik Vesti finished second in both races at Monza this past weekend, following a disappointing triple-header up to that point.

FormulaNerds sat down with Vesti after the races to talk about his rookie season so far, as well as how he’s preparing for a potential title fight in 2023.

Highlights of the season

It’s been a bit of an up-and-down season for the Danish driver so far. He didn’t score his first points until Round 3, but has since taken a pole position and a win, along with four additional podiums.

After four consecutive top-five finishes, Vesti failed to score for two whole rounds following the summer break. Then, in Monza, he took two second places, bumping himself up to eighth in the standings.

FormulaNerds asked Vesti about his personal highlights for the season. He mentioned his pole position in Austria, as well as his race win in Baku.

“Well, pole in the Red Bull Ring was massive. Doing pole position coming from nowhere in the beginning of the year in qualifying and suddenly doing P2, P1, and P3 in three consecutive qualifyings was definitely a highlight. But also the win in Baku where I started P2 and won the race.

“It was a big win that meant so much because it had been so difficult. To prove to myself that actually I was able to win in F2, that was sort of the start of this season.”

Finding the limit in qualifying

Ahead of the weekend in Monza, Vesti told FormulaNerds how important qualifying is in Formula 2.

He was aiming for a good qualifying in Monza, which he achieved by qualifying tenth. That allowed him to start on reverse grid pole for the Sprint Race. It was an improvement from the weekends before, when he didn’t make it into the top ten.

“For me the main thing if we look at Spa and Zandvoort, I was really fast in the races,” Vesti explained. “Top five pace in each race. But just starting outside the top ten made it difficult to show any great stuff.

“Then being P10 in quali really helped me in Monza because I started on pole yesterday and got a good result, which obviously boosts the team and boosts me in confidence. And the race pace remains the same as in other races, really really strong, and that showed today with the right strategy and good pace we can fight for the win in the Feature Race which is awesome.”

Vesti also cited qualifying as the area where he has improved the most over the course of the season.

“Clearly we started in Bahrain, Jeddah, and Imola, not even close to being in the top ten. Then Barcelona arrived and finally we did a good quali, and the results really started to come.

“So the first thing was to be consistent in quali, that’s the whole foundation for a good race weekend, and good race weekends are the foundation for the championship. Being strong in quali is the key, and how I progressed into being so consistent in quali before the summer break was definitely working mentally on pushing the car right to the limit and sometimes beyond to do the fastest lap possible.”

Vesti drives for ART Grand Prix, the team currently tied for first in the team’s championship. Theo Pourchaire, the other ART driver, was contending for the driver’s title until Felipe Drugovich clinched it in Monza.

Whilst it’s been a strong year for Pourchaire, it’s also been a tough one. He looked to be in the ascendency heading into the summer break, just 21 points behind Drugovich at that stage.

However, the triple-header has not gone to plan. Bad luck with reliability and his own driver errors allowed Drugovich to wrap up the title with a round to spare. Ultimately, it’s a season of ‘what could have been’ for the Frenchman, who is likely to move on from F2 at the end of the year.

When FormulaNerds asked what it’s like for Vesti’s side of the garage when Pourchaire has a bad weekend, he spoke about the team’s dynamic.

“We have the same car but things play out differently, and we’re here to support each other. We’re not here to be bad people or anything like that. Theo is very nice and congratulates me when I do well, and the opposite when he does well and I’m not even in the top ten. So there’s a really good team spirit, and Theo is really easy to work with in that sense. There’s never a bad mood or anything.

“I’m here to help him and he’s here to help me, and I think that’s why ART is currently P1 in the team championship, because there’s this really strong relationship and we’re not trying to make it worse for the other one. We’re here to win.”

With just one round left to go and ART and MP Motorsport tied on points, both drivers getting good results will be crucial in Abu Dhabi.

Since he’s in his rookie season, Vesti is likely to continue for at least another year of Formula 2.

FormulaNerds asked him how he’ll prepare for next season, with everything he’s learned so far in mind.

“Well, it’s finding the limit in qualifying and free practice, those two are the main things for me. I struggle to go right at the limit on the soft tyre when we do FP on the prime and then go on the option. So that’s what I really need to make the step.

“If I can just be in the top ten or top five in each quali, I’m sure I can fight for the championship next year. That’s where we are, and how I will do that is on the mental side, but also the preparation, both at the Mercedes F1 team, but also at home with my team.”

With ART potentially winning the team’s championship this season and Pourchaire being a title contender, Vesti could likely be in the mix next season. Of course, he still has one round still to go in 2022, although not for another two months.