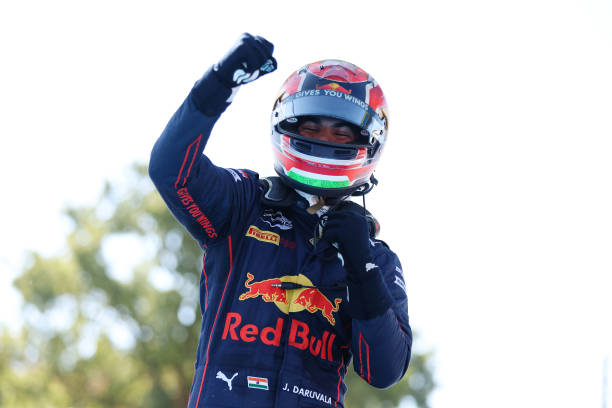 F2 Exclusive: Daruvala on his “best weekend in Formula 2” and a tough season

The Red Bull junior discusses his double podium, first win, and how he's coped with a disappointing season

Jehan Daruvala scored a double podium in Monza last weekend, and finally took his first race win of the season.

The Red Bull junior driving for PREMA hasn’t had the season he’s expected to. But finally, with just two weekends left to go, he celebrated one of his best weekends in the category to date.

After Daruvala’s successful weekend, FormulaNerds talked to him about how he felt about it, as well as his season so far and his plans for the future.

Daruvala qualified sixth coming into the penultimate round of the Formula 2 season. That put him fifth on the grid for the Sprint Race, but he capitalised on the chaos of the race to finish third.

Then in the Feature Race, Daruvala was able to capitalise on even more chaos. Despite starting sixth and making contact with Jack Doohan on the first lap, a brilliant strategy call put him in the lead.

The Indian driver came out on top after a Safety Car and a well-timed pit stop, and then controlled the race from there, taking his first win of 2022.

Daruvala talked FormulaNerds through the chaotic session, saying: “To be honest, looking back at the first lap I left enough space for Jack but I didn’t see a third car. In the end, three into one [corner] never works.

“Then I had damage on my bargeboard, I was actually going to box that lap but it flew off so then I was able to continue. Then the call was late to box, I saw the Safety Car panels come out and I came in straight away. We were quite lucky with the timing, but we had an amazing pit stop and then I just kept calm.

“I knew I was the lead car, we had good pace all weekend, so I just had to keep my nose clean. Three laps to go my radio stopped working, so I could see the gap but I wasn’t quite sure. But in the end, I’m really happy to win at this race, it means a lot.”

First win of the season

Daruvala has been no stranger to the podium this season. In Monza, he took his eighth podium of the year. But the win had eluded him until now.

“After coming third yesterday in the Sprint Race I was like ‘yeah, another Sprint Race podium’” he said. “But I really wanted to do well in the Feature Race and win, so it feels really good. You score 25 points on Sunday starting sixth on the grid, you know, I’ll take that any day of the week.

“Like I said, I’m happy that we not only won, but we showed a lot of pace. That for me is the most important thing. When I’m fast I’m happy, and we were fast today so I’m happy about it.”

This win bumps Daruvala up into fifth in the standings. He’s tied on points with Doohan in fourth, and Enzo Fittipaldi in sixth. All three of them are just nine points away from Logan Sargeant, who sits third overall.

It’ll be a free for all in the final round at Abu Dhabi, with nine different drivers fighting for third in the championship. Daruvala will be one of them hoping to secure a good finishing position in his third season.

Reflecting on his season

Daruvala has admitted that this season hasn’t been what he was expecting or hoping for. He came into a team that’s taken the team’s championship the past two years and taken three drivers to the title. Now he’s targeting a best-placed finish of third overall, with just one win to his name.

Daruvala cited this season as one of personal growth, saying he’s been learning through all of the disappointment he’s suffered.

“I think it’s been a year of growing, more than as a driver, it’s been growing mentally as a person. There have been a few races where I had a chance to win but I broke down in Spain, and then I got kicked out in the Red Bull Ring. I’ve thrown away a lot of points.

“Obviously winning the championship was probably not going to happen with the pace Felipe had and the struggles we’ve had this year. In the end, the main thing is to be able to bounce back.

Had Daruvala’s season gone differently, he might currently be in the running for a Formula 1 seat at AlphaTauri. But Red Bull has expressed disappointment in the performance of all five of their junior drivers in Formula 2, and are currently looking to IndyCar driver Colton Herta to fill one of those seats.

This situation leaves Daruvala in the dark about what his plans past this year are. FormulaNerds asked him what difference a race win makes to his future.

“I think it is obviously good to win,” he answered. “The level is really high. But in the end, I’ve not had the year I wanted to, I’ve not had the year I should have had in terms of going to Formula 1, so that looks really difficult. But I want to drive race cars for a living and I know I’m good enough to do it so that’ll be my target to finalize plans for the coming future.”

Following Monza, Formula 2 has a two-month break until the final round of their season. Most drivers will be starting to make plans for next year while they prepare to finish out the year on a high.

As far as his plans for the break, Daruvala said: “A bit of relaxing, a bit of driving, but not too much. The main thing is to nail down what I’m going to be doing next year, that way my head can stay calm and not overthink about stuff.”