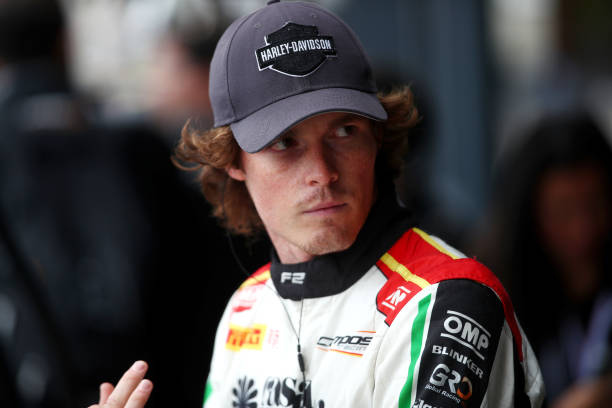 SPA, BELGIUM - AUGUST 27: Ralph Boschung of Switzerland and Campos Racing (15) prepares to drive during the Round 11:Spa-Francorchamps Sprint race of the Formula 2 Championship at Circuit de Spa-Francorchamps on August 27, 2022 in Spa, Belgium. (Photo by Joe Portlock - Formula 1/Formula Motorsport Limited via Getty Images)

The Campos driver has worked very hard to get to where he is now.

Ralph Boschung has been racing in Formula 2 since 2017, but only completed his first full season last year.

A lack of funding had stopped the Swiss driver from being able to land a full-time Formula 2 seat, until 2021. He managed to secure financial backing by doing something only a few racing drivers can do: handling his management and sponsorships himself.

From his first full season in 2021 to securing a solid sponsor for 2022, things were looking up for the Campos driver. But an unexpected neck injury threw a wrench in his plans. As a result, Boschung was out for half of the season.

Ahead of his return to Formula 2 at Spa, Boschung sat down with FormulaNerds to discuss how he handles all the behind-the-scenes work by himself, and what it’s been like during his time out of the car.

Partnering with “The Moon”

Boschung announced the deal in February of 2022. The result of their partnership was one of the most unique liveries Formula 2 has ever seen. Boschung’s #15 Campos car is decked out in Bitcoin and NFT logos. It also has Runefelt’s face on the front.

Runefelt had a huge say in the design of the livery, which allowed him to include a QR code on the car that promotes helping children with disabilities.

“Formula 2 is giving me a platform that is near and dear to my heart, helping children with disabilities,” said Runefelt when the deal was announced. “My little brother was born disabled. I put a QR code on the car to raise money for disabled children. I will utilize every race to not only spread the word about crypto, but also I’ll raise money for charity for different foundations that help children with disabilities! Bringing these two worlds together, I know I can help the world a little bit.”

Runefelt can often be found accompanying Boschung on race weekends and supporting his car.

Heading into 2022, Boschung was getting ready for what he thought would be just his second full season in Formula 2. But an unanticipated neck injury saw him out of competition after just two rounds.

Ever since Imola, Boschung has been suffering from severe facet syndrome, something that’s caused him to miss half of the 2022 season so far.

He missed Barcelona and Monaco, before coming back for the sixth round at Baku. He qualified 18th but made his way up to score points in the Feature Race. All the same, his pain persisted and he dropped out again after Qualifying in Silverstone.

Even ahead of his return to Formula 2 at Spa, he told FormulaNerds that he still had a long way to go before he would be fully recovered from his injury.

“I think, realistically speaking, for it to completely go away I would need to actually stop for the whole season.”

But because of his sponsorship deals, Boschung was anxious to get back in the car as soon as possible.

Being his own manager

It’s very rare for a racing driver to handle all their sponsorships by themselves. Most drivers have either a Formula 1 academy or a manager to deal with the behind-the-scenes negotiations.

Boschung is one of two drivers, the other being Trident’s Richard Verschoor, on the 2022 Formula 2 grid who does this work.

Boschung told FormulaNerds that handling sponsor negotiations by himself has changed his perspective on racing.

“I think that I kind of look at racing from a different perspective, maybe to some other drivers. Obviously, I know what it takes to get the funding. Once you get the funding you realise how much money that actually is.

“I think it gives me a bit of an advantage in a way because you would potentially have more pressure, but in my view, I see it as a little bit less because I think achieving this kind of thing by getting the funding to race a whole season is something that I could use in the future in my personal life. So in case something happens in racing, I feel like I would be able to manage myself in my normal life, in the business side of things.”

While Boschung thinks that, overall, everything he’s learned gives him an advantage, he admitted that there have also been disadvantages.

“I think the disadvantages are probably that it’s obviously a lot of workloads,” he said. “It’s very energy consuming and time-consuming. I think the pressure in the beginning when you start doing it is pretty high. And obviously you have to manage the sponsors, but at the end of the day you manage human beings, and every human being is different and you’ve got to try and understand how that person would react to certain scenarios.

‘So I think that’s a very interesting thing to do anyway. But then I think definitely when the results are there, I just feel like it’s amazing for sure, because it’s obviously so much work, so when you achieve that plus then get good results, it’s just like the cherry on the cake.”

Boschung has had some very good results since he first got a full-time Formula 2 seat last year. In 2021 he scored two podiums with Campos and finished the year 10th in the standings with 59.5 points.

This year, despite missing six full rounds, he is currently 14th overall. He has scored 40 points in the six rounds he has contested.

Working during his recovery

In the midst of dealing with his neck injury, Boschung also had to manage his sponsorships during his break.

“First of all I’m very grateful because my sponsors are actually very supportive of what’s happening with my neck, so obviously that makes it a bit easier. But for sure I was never in a scenario like that, it’s kind of an emergency scenario that you have to manage well with all of the sponsors and all the parties involved.

“So you know, there’s a little bit more pressure, but I’m quite used to it obviously, from all the years I’ve been doing that. So by learning so much in the past I think I’ve managed that situation pretty well. But obviously, it’s a constant pressure, that’s a no-brainer.”

In most cases when a driver is injured, their team is in charge of planning what happens next. But for Boschung, there was a lot of work to do behind the scenes to decide what to do with his car. While he wasn’t racing, he worked with his sponsors and Campos to make a plan.

“They’ve been very understanding,” Boschung said about his sponsors. “But I think there was one point where it was like, ok I probably can’t drive now for the next couple of races.

“I have the strategy, well we, kind of together with the sponsor, have the strategy. There’s two scenarios: either we keep the car running the way it is with everything they’ve got on the car, or we have the other strategy which is to regroup some money for this year, so we get a driver that potentially has the money to fill the gap, and then we would refund the sponsor with it. But then he would obviously lose all the exposure on the car.”

“We had these two plans, and they decided to go with plan A,” said Boschung. “Which is keep paying the invoices, keep the same car, and we just take a driver that we think is the best fit for the team and for us in terms of results. Because obviously the better the results the more TV time, and that’s obviously very crucial for the sponsor. And I think we managed that very well with Roberto because you know in the first round, I think 70 per cent of the race it was basically our car that was on TV.”

Merhi drove Boschung’s car for three rounds in Austria, France, and Hungary. Despite qualifying 21st at Spielberg, he made quite a splash later on in the weekend. A strategy play and wet weather saw him finish third in the Feature Race.

Boschung had a lot of input into the decision to put Merhi in the car. He said that Merhi being a former F1 driver was “a very good selling point.”

“Actually it was my idea, to be honest. I called Roberto immediately in Silverstone when I was still in the paddock and I knew I had to withdraw from the race. I knew that it makes sense, you’ve got a Spanish team and a Spanish driver, there’s already a lot of press around that. He was an ex-F1 driver, that’s 10 times more.

“He’s got a lot of experience, he’s bloody quick, and that’s what I told my sponsor. ‘Look, I’ve got these options, I think we should take this one, it’s definitely going to be the best,’ and I think it paid off.”

Boschung’s return to Formula 2 in Spa went brilliantly. He qualified 10th, which put him on pole for Saturday’s Sprint Race. Despite still being injured and having missed out on the previous four rounds, he held on to finish third and took his second podium of the year.

After that race, FormulaNerds asked Boschung how much more rewarding it felt to get such a good result after all his work to get funding.

“Well a lot obviously, because it’s a lot of work to get such a budget together for sure,” he said. “I’ve learned quite a lot over the last couple of years, I’ve made a lot of mistakes for sure when I struggled to get the budgets together.

“But yeah, since last year I got some very strong sponsors on board, and for sure, when you get a good result it just feels incredibly, incredibly good.”

Boschung also told FormulaNerds that he has plans to continue in Formula 2 next season. Originally he had planned for 2022 to be his final year. But now, he wants to go out on a better note after missing so many rounds.

But if another season of Formula 2 doesn’t work out, he’s confident that he’ll find something else to do.

“If not, then obviously I will need to see what else can be interesting in terms of racing, but to be honest I am not really a fan of a car with a roof or anything like that. So I would say maybe outside of racing I still have some nice ideas, which are maybe still in motorsport but just on the other side of the fence.”