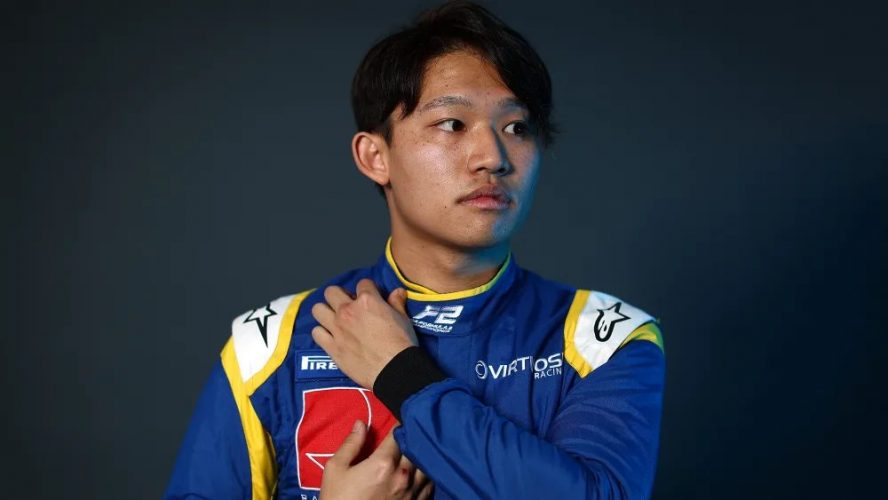 Sato is currently 20th in the championship, but he remains positive as the season continues.

Despite a solid foundation in motorsport and great skills, Formula 2 hasn’t been a story of success for Marino Sato.

As the Japanese driver is celebrating his 23rd birthday today, we take a look back over his career. With a great profile, he started competing in karting at the age of 12.

If we compare it with other drivers, starting karting at 12 years old can be a little late, but for Marino Sato, it wasn’t a step back.

He competed in the Asian Karting Open Championship with a great start and got 12th place.

As time passed, he got noticed by a few team principals and switched to single-seaters. His debut was the Italian Formula 4 Championship with the Vicenzo Sospiri Racing team.

As he moved into the Motopark team, Sato competed in multiple series, such as Italian F4, FIA Formula 3 European and Macau Grand Prix.

His most successful championship was in 2019 at the Euroformula Open Championship.

He got nine wins, 11 podiums and 307 points, which gave him the victory of a champion.

One of his best races was at the Hungaroring. He had a great qualifying lap, followed by a race victory.

Moving up to Formula 2

At the same time, Sato was competing in the Euro Formula, he got the opportunity to race in FIA Formula 2 with Campos Racing as a test. For this debut, he finished 21st.

From here things got more serious and in the 2020 season, he signed a contract with Trident to be one of the main drivers. This season wasn’t what the Japanese and the team expected at all as he finished 22nd place.

Moving through the 2021 season, with a new teammate and scoring just four points, was an improvement but still wasn’t what all expected. He finished 21st in the championship, not improving much on his debut.

For the 2022 season, Sato moved teams to UNI-Virtuosi Racing. He partnered with Australian driver, Jack Doohan.

When speaking about his thoughts about the current season, Sato said:

“Considering the year before, last season was a big step. Even from the beginning of last season, we had gotten better with the management of the tyres. Unfortunately, I had too many DNFs, but looking at my teammate, I think we were always improving.”

As we have seen in previous races, Sato still has improvements to make. He doesn’t quite have the pace that other drivers have reflected in his race results below. But as the season continues, hard work and gaining more experience will surely help him improve.

Theo Pourchaire is leading the championship with 52 points, 48 more than Sato.

With a positive vision of the opportunity to score more points, demonstrate his skills, and much more, Sato is excited about the next race in Spain – 20th-22nd May. He is currently 20th in the Drivers’ Championship with UNI-Virtuosi Racing, 11th in the Team Standings.