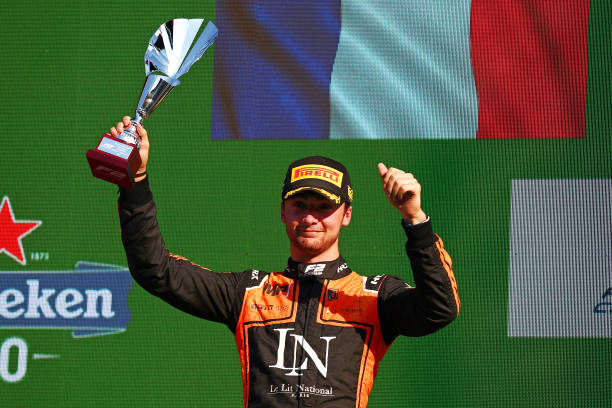 ZANDVOORT, NETHERLANDS - SEPTEMBER 03: Second placed Clement Novalak of France and MP Motorsport (12) celebrates on the podium during the Round 12:Zandvoort Sprint race of the Formula 2 Championship at Circuit Zandvoort on September 03, 2022 in Zandvoort, Netherlands. (Photo by Alex Pantling - Formula 1/Formula Motorsport Limited via Getty Images)

The French driver is in his rookie season of Formula 2

Clement Novalak is in his rookie season of Formula 2, driving with MP Motorsport.

Coming off the back of a successful Formula 3 campaign, it’s been a tough season for the French driver. With one round of the Formula 2 season left to go, Novalak is 14th in the standings, while his team leads the team’s championship.

Novalak began karting in 2011 at the age of ten. His accolades include winning the WSK Super Master Series in 2015 in the junior class, and then again in 2017 in the higher class.

In 2018 Novalak made the switch to single-seaters, debuting in the Toyota Racing Series held in New Zealand. In that category he finished fifth overall, scoring two wins to finish below his future Formula 2 rivals Richard Verschoor and Marcus Armstrong.

Novalak scored a full-time seat in BRDC British Formula 3 for 2019, driving for Carlin Racing. He only won two races that year, but still took the title by 23 points over Jonathan Hoggard.

Notably, he only finished outside the top ten once in the whole season (taking 12th place at the Donington Park circuit). Along with that, he managed not to retire in any of the races, making his consistency the main factor in his successful bid for the title.

His performance in British Formula 3 was more than enough for Carlin to promote him to their FIA Formula 3 team for 2020, which they did.

Novalak was one of two full-time drivers for Carlin’s 2020 Formula 3 team, alongside American Cameron Das. The third car was driven by four different drivers throughout the season.

At the end of the season, Novalak was in 12th overall with 45 points, which doesn’t seem at first glance like a particularly stellar year. But his results get dramatically more impressive when you look at the performance of the team as a whole.

Carlin finished the season with 46 total points. The one point of those 46 that wasn’t scored by Novalak came from Ben Barnicoat, who finished tenth in one of the four races he contested for the team. Das, the only other full-time driver, finished 25th overall with a best-placed finish of 11th.

Novalak also scored two podiums in 2020, taking third place at the Red Bull Ring in the first round of the season and then second place in Silverstone later in the year.

For 2021 Novalak stayed in Formula 3 but moved to the Trident team. Once again, Novalak’s consistency as a driver is what pushed him towards success. He didn’t win a race in 2021, but finished third in the championship behind PREMA’s Dennis Hauger and Trident teammate Jack Doohan.

Novalak only scored four podiums in 2021, two second places and two third places. That’s not many compared to Hauger’s eight and Doohan’s seven. But the French driver only finished outside the points twice the whole season (not including his two retirements).

By Liam Ploetner2 days ago

Novalak made the step up to Formula 2 for the final two rounds of 2021. He raced for MP Motorsport in Jeddah and Abu Dhabi, replacing David Beckmann. While his performances weren’t particularly notable in these races, he returned with MP Motorsport full-time for 2022. This year he would be partnering a much more experienced Felipe Drugovich.

It was a tough start to the season for Novalak, who didn’t score points until the third round at Imola. Despite qualifying 13th, a good strategy call saw him jump up to finish fourth in the Feature Race.

Novalak took a fifth-placed finish the following Feature Race in Barcelona, but then hit another run of point-less races. His struggles were all the more apparent as his teammate Drugovich was dominating the driver’s championship throughout the season.

After an eighth-placed finish in France, Novalak headed into the summer break with just 26 points. After the summer break, however, things started to look up. While he retired from two of the six races of Formula 2’s triple header, he took his first podium in the Sprint Race at Zandvoort. He also finished ninth and eighth in the Spa and Monza Feature Races, bumping his points total up to 40.

Those 40 points pale in comparison to Drugovich’s 241, but it’s tough to fairly judge a rookie against such an experienced driver. Novalak has proven his ability to be consistent (sometimes to a fault), but Formula 2 often sees drivers struggle to get up to speed.