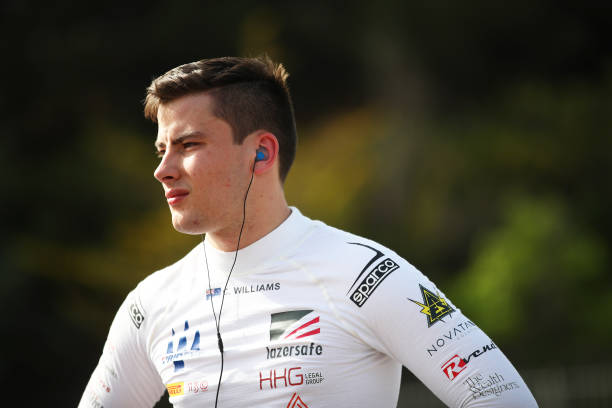 BARCELONA, SPAIN - MAY 21: Calan Williams of Australia and Trident (21) prepares to drive during the Round 4:Barcelona Sprint Race of the Formula 2 Championship at Circuit de Barcelona-Catalunya on May 21, 2022 in Barcelona, Spain. (Photo by Joe Portlock - Formula 1/Formula Motorsport Limited via Getty Images)

19th placed Calan Williams has high hopes for the rest of his rookie season of Formula 2.

The Australian driver is driving for Trident, and has made his way to Formula 2 after two seasons in Formula 3. While he’s only scored points once so far, he’s confident he can make his way into the top ten.

Making the step up

After two seasons with Jenzer Motorsport in Formula 3, Williams accrued a total of three points finishes and one podium. After qualifying 12th at Le Castellet in 2021, Williams started the first Sprint Race from reverse grid pole. He ended up finishing third and scoring his maiden, and only podium in the series.

Williams told Formula 2 that the step from Formula 3 to Formula 2 is a big one, and it takes time to adjust to.

“It’s not just a step-up in the performance of the car,” he said. “It’s a completely different car. I make the analogy sometimes whether it’s right or wrong, but it’d be like you’re playing football, and you move up a tier, but then you have to start playing rugby.

“It’s a completely different driving style, the car is so different that there’s a lot to learn and a lot that you have to prepare for coming into a season, especially such a busy season like this year.”

Despite the drastic changes from one series to another, Williams insisted his approach hasn’t changed all that much.

“I wouldn’t say necessarily I’ve changed anything from last year but, as you start to work more with your team and with yourself, you begin to understand what you need more or less of. You’re still doing all the work but you’re understanding which areas you need to prioritise not only with the sim preparation, but with everything.

“My physical fitness, my mental training, how I work with the team, absolutely everything is this constant process of trying to extract the maximum you can out of every single element that is part of motorsport and understanding how you need to prioritise.”

Twelve races into his rookie Formula 2 season, Williams believed he’s seen improvements, a belief backed up by some of his results.

“So far, some of the results have been very promising. We had a bit of a tough weekend at Imola, but you get those from time to time. But I think the pace, particularly compared with my teammate, Richard (Verschoor), who is a very strong driver, has been quite good throughout the year and in the tests, etc. So, you know, for my rookie season of Formula 2, I’m quite happy with it.”

Williams saw his best result of the season so far in Round 2 at Jeddah. He qualified seventh and then held on to finish fourth in the Sprint Race. While that occasion was the only time he’s scored points so far, he’s insistent that there’s more where that came from.

“My goals will continue to develop throughout the season. The first couple rounds, I was finding my feet, seeing where I was in the championship. You get a lot of information from testing, but it’s never the same as an actual competitive session, like a Qualifying or a race. I’m starting to refine my goals now and will continue to throughout the season, but certainly, this year at this point in time, a good result for me would be to finish top ten in the championship, I think that is definitely achievable.

“Honestly, for our first year in Formula 2, that would be quite a strong result. But looking at where we are so far, I also believe that that is 100% where I should be. Towards the end of the year, maybe I’ll have some different goals, depending on how things pan out and where I need to progress in the future. At the moment, I’m still pretty open-minded but that would be a solid result for the year.”

Williams has definitely found more pace, qualifying in the top ten a total of two out of six rounds so far. All the same, it’s a big ask to get into the top ten. While Williams has five points currently, tenth-placed Liam Lawson has 44 points. It’s a big deficit to make up, but as we all know, anything can happen in Formula 2.