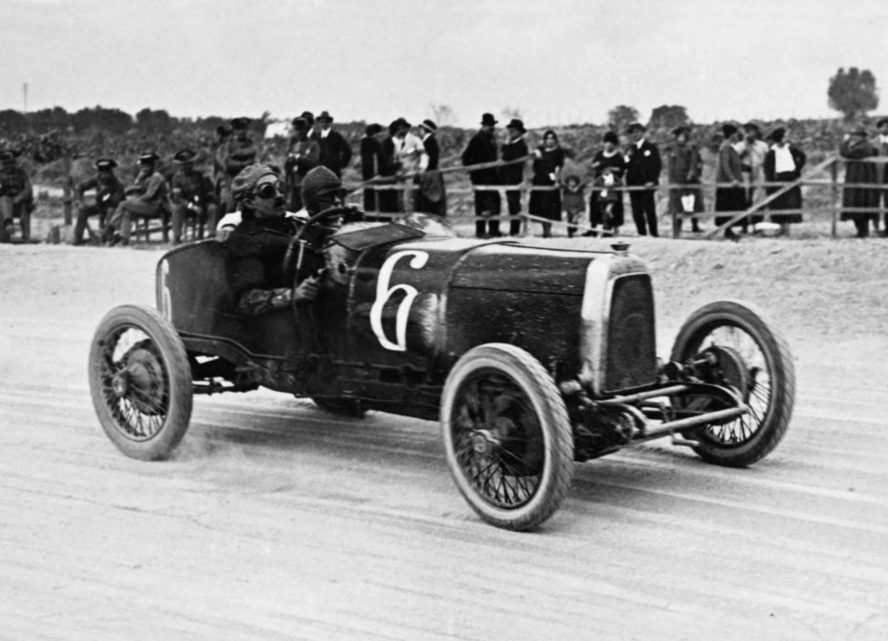 Aston Martin has announced plans to run its Formula 1 cars with a special one-off motif during this weekend’s French Grand Prix.

In place of the team’s traditional logo, the nose of its cars are set to feature Aston Martin’s marque from 1913. The branding was first sported by Aston Martin’s original top-flight racer known as the ‘Green Pea,’ which debuted at the French Grand Prix in 1922.

As well as paying tribute with a livery change, the team is also planning to blow the cobwebs off its iconic racer, and let four-time world champion Sebastian Vettel blast it around Circuit Paul Ricard, in celebration of the 100th year since its racing journey began.

“[The] Green Pea holds a very special place in Aston Martin’s heritage, and you can almost feel that century of history beneath your fingertips when at the wheel,” said Vettel in a statement.

“The racing spirit and will to win is something that defines Aston Martin, and it’s fantastic to celebrate it this weekend as we bring [the] Green Pea and our heritage in motorsport together with the cutting-edge technology and performance of today’s AMR22 car,” he added.

Affectionately nicknamed the Green Pea, the 1922 race car was one of two Aston Martin entries to a 60-lap, 800 km event along a road circuit in Strasbourg one hundred years ago.

The cars were built by the company’s Founder Lionel Martin on-commission from wealthy racer Count Louis Zborowski, who poured £10,000 into their construction. Zborowski’s investment allowed for the development of an entirely new 16-valve twin overhead cam four-cylinder engine, which was designed for racing at the 1922 Isle of Man TT.

As such, Aston Martin’s Green Peas were initially called ‘TT1’ and ‘TT2,’ but after they weren’t ready on time to compete in the TT, they instead debuted at the French Grand Prix on July 15, 1922.

While just five drivers ultimately finished the race, with Zborowski himself retiring the TT1 after 19 laps with engine issues, Aston Martin’s participation at the event makes it the longest-serving current F1 team, when it comes to top-flight racing history.

“Aston Martin benefits from the earliest Grand Prix history of any manufacturer currently racing in F1, and we are proud to celebrate that this weekend, 100 years on from making our debut at the French Grand Prix,” said Aston Martin Owner Lawrence Stroll.

“We continue to climb together, following in the footsteps of those who led the way,” he added. “I believe we can all look forward to many more seasons of intense competition in what is, today, nothing short of a global sporting phenomenon.”

As a team with an impressive pedigree across multiple racing disciplines, Aston Martin is, of course, entitled to celebrate what is an unprecedented milestone. However, the outfit’s start to the 2022 Formula 1 season has been far from ideal, and it currently sits second bottom of the constructors’ standings, with just 18 points.

Since buying Aston Martin in 2020, Lawrence Stroll has pledged to invest heavily in expanding its operations, with the aim of establishing it as one of the front runners in F1.

As reported by the Financial Times last autumn, Stroll committed up to £200 million to the construction of a new manufacturing HQ for the team, as part of plans to raise its value to around £1 billion by 2026.

But so far this season, the Canadian entrepreneur’s backing hasn’t translated into on-track performance. According to Team Principal Mike Krack, this is largely because Aston Martin’s updates haven’t managed to solve some of the fundamental issues of its car yet.

“The drivers are mainly always complaining about grip and balance,” Krack told the Race. “When you push it really hard, which I always think when you have a car that is not quick enough, you over push or you try to over push, so you have balance problems.”

“Also we have had now sessions where to go faster, you need more grip. We struggled in all high-speed areas,” he added. “The car is quite OK in the low-speed. But as soon as it goes high-speed, we are lacking.”

So, will Aston Martin begin to advance up the grid at the French Grand Prix? With Krack recently calling for his team to “find a way out” of its current predicament, it doesn’t seem like they’ve found a silver bullet to solve its issues for this weekend’s event.

That said, things can change very quickly in the world of F1, and given that the race is a 100-year anniversary for the team, it’ll surely be giving absolutely everything to achieve a points finish and celebrate the Green Pea’s debut in style.