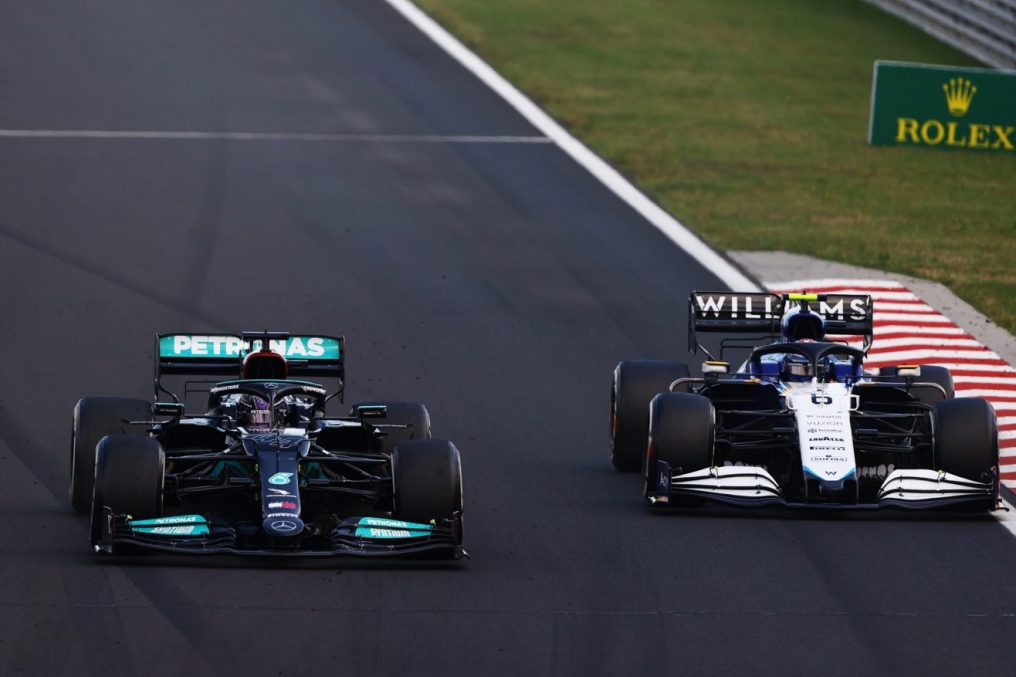 Their recent experience in Formula 1 is comparable to London busses; they’ve waited since 2019 – where Robert Kubica took advantage of a chaotic race at Hockenheim to scrape 20th – to score any kind of points in the sport.

But last weekend, both Nicholas Latifi and George Russell were able to capitalise on a barmy race in Budapest to take home a double-points finish for the Grove team, finishing eighth and ninth respectively – the team’s first since the 2018 Italian Grand Prix when Sergey Sirotkin and Lance Stroll finished ninth and 10th.

It’s been a tough few seasons for Williams, and this result will mean the world to them, as evidenced by Russell’s emotional interviews after the race.

The team are one of the most successful in F1 history, winning 114 races and nine constructors championships’, but have had to wait 40 races for their next points. The wait for a double-points scoring finish has been even longer at 58 races.

Williams achieved the feat seven times back in 2015, helping them to finish third in the constructors’ standings, such has been how the mighty have fallen.

Latifi even managed to score the team’s best result since Felipe Massa’s drive to seventh in Brazil back in 2017.

The landscape of F1 can change so quickly and it’s a vastly different place since the last time Williams managed to get both of their cars into the top 10, records have been smashed, new stars have been born and familiar faces have said goodbye.

The world itself has also seen incredible changes since the 2018 Italian Grand Prix, showing just how long the wait has been for Williams to score another double-points finish.

The Brit moved to Mercedes in 2013, winning back-to-back titles in 2014 and 2015, the second and third of his illustrious career.

During these years, Williams were an incredibly competitive team, finishing third in the constructors’ standings in 2014 and 2015.

Since then, a motorsport giant has rapidly declined.

After slipping back to being the fifth-best team in 2016 and 2017, Williams then fell back to earn the title of chief backmarker.

Hamilton, meanwhile, has gone on to cement himself as one of the sport’s greatest ever performers.

Despite losing the 2016 title to nemesis Nico Rosberg, Hamilton has gone onto add another four consecutive world championships to his tally, levelling the great Michael Schumacher.

Since Williams’ last double-points finish in 2018 at Monza – a race which Hamilton won – the Mercedes driver has taken a further 31 victories and dominated three world championships.

Williams descent has been staggering, but as has Hamilton’s rise to immortality.

Young talents have asserted themselves

The driver line-up in 2018 was completely different from the current crop of talent on the grid as the never-ending conveyor belt of the market continues to spin.

At a lot of teams, the philosophy has been out with the old and in with the new – seeing a young batch of exciting drivers looking to make a name for themselves in the sport.

Ferrari had a pairing of Sebastian Vettel and Kimi Raikkonen in 2018, both at the time in their 30s.

Williams’ own Russell has been the shining light in what has been a dark room for his team over the last three seasons.

The Kings Lynn driver has managed to haul his car into Q2, and sometimes even Q3, on times when it had no right to be there.

Sunday’s race will be the cherry on top for Russell and his Williams career as he is expected to move to Mercedes for 2022, especially after being within touching distance to points on numerous occasions prior, but always coming up just short.

The other talent is fan-favourite Lando Norris.

Joining McLaren aged just 19, the starlet has gone on to score four podiums already and is a brilliant third currently in this year’s drivers’ standings.

Other youngsters have also come through since 2018, including Mick Schumacher and Yuki Tsunoda in 2021.

The grid is an entirely different place, with plenty of new, younger-looking, faces.

Plenty of drivers who raced at Monza in 2018 are no longer in F1, but three names stand out above the rest.

Romain Grosjean and Kevin Magnussen are two, with the bickering Haas teammates both being released in 2020.

Grosjean’s reputation of being an error-prone driver has been overshadowed by his heroic recovery after the horrific crash he suffered at last year’s Bahrain Grand Prix.

Magnussen actually left the sport with plenty of experience, starting 119 races, putting him in the top 60 of all time, ahead of the likes of Keke Rosberg and Damon Hill.

The other familiar face to be moved on was Nico Hulkenberg.

The German has made 129 appearances – the same as Grosjean – and was one of the most consistent drivers in F1.

Sadly, his career will always be remembered as so close, yet so far, having never been on the podium despite being in promising positions.

Hulkenberg was released by Renault after the 2019 season, favouring Esteban Ocon for the role.

Two new names appeared ahead of the 2021 season.

Aston Martin – who hadn’t featured in F1 since 1960 – returned to the sport after the rebranding of Racing Point under business tycoon Lawrence Stroll, bringing green back to the grid.

Renault also became Alpine for this year, sporting a striking new blue and red livery and bringing a legend out of hibernation.

Alpine’s driver lineup has left and returned to F1

Neither Ocon nor Fernando Alonso was racing in F1 back in 2019.

The former was released by Racing Point the year prior, with Stroll getting the nod at the team his father, Lawrence, had recently bought.

Ocon returned to the sport in 2020, joining Daniel Ricciardo at Renault, scoring his maiden podium at the Sahkir Grand Prix that year.

A season later, and the Frenchman is now a race winner after a sensational victory in Budapest on Sunday.

Alonso returned to F1 this year after a two-year hiatus where he took part in various disciplines and even won the 24 Hours of Le Mans, twice.

He did show a bit of rust during the early rounds of the season, but has been back to his best in recent races, including some stubborn defence against Hamilton on Sunday to aid his Alpine teammate to victory.

The pandemic has caused havoc for F1

Williams couldn’t have predicted that their next points-scoring finish would come when face coverings are the norm in F1.

Even behind the masks, the joy on the faces of the entire team was clear to see.

During the pandemic, factories were shut down, race tracks remained empty and all the teams struggled.

Even when racing returned, it wasn’t the same.

Grandstands were empty, masks became mandatory and the usual bustle before a race was lost.

It’s been a difficult 18 months for Williams especially, with the outfit being put under a financial strain, reporting losses of $13 million in May 2o20.

Since then, they have made steady progress and this could be a crucial moment in the history of the team, building momentum with next year’s regulation changes looming.

Williams are an entirely different team

Few things remain the same at Williams since the last time they got both cars into the top 10 way back in 2018.

Both Sirotkin and Stroll have moved on, with Russell joining the team in 2019 alongside Robert Kubica, who made a surprise return to the sport for one year before being replaced by Latifi.

The makeup of the team has also changed beyond belief off-track also.

Williams faced huge financial hardship during the pandemic and could have even left the sport, but were purchased by hedge fund Dorliton Capital in 2020.

This meant the team was no longer owned by the Williams family for the first time in its history, with former team boss Claire stepping away from her role.

Temporary team principal Simon Roberts has also been moved on, with Jost Capito taking over.

Money doesn’t seem to be an issue for the modern Williams team with strong backing from their new owners, and they will be looking forward to the new regulations in 2022 to try and mount a resurgence up the grid.