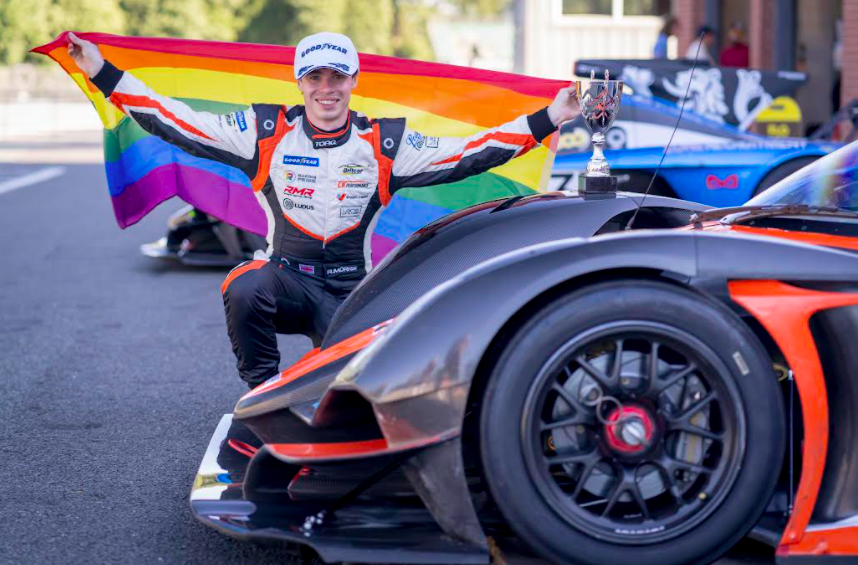 We're taking a deeper look into the motorsport world.

This week, FormulaNerds had the amazing opportunity to speak with Richard Morris, Racing Pride Co-founder and Driver Ambassador and Racing Driver for CWPerformance Praga, who is championing LGBTQ+ Inclusion with positive promotion through Motorsport.

Based close to Northampton, Richard is right in the middle of the motorsport world. We all saw how the pandemic disrupted the flow of our favourite sport, race calendar changes, missing crowds, and the lack of fan engagement but Morris continued driving on for his mission.

As a winner in superkarts, Formula Ford single-seater championships, and sports prototype cars, Richard has excelled within the motorsport industry. From 2019-20, he was the works driver for Spire Sports Cars. In 2021, he received a new car racing for Praga in their latest generation R1 with CW Performance and has already won three races and taken 5 podiums in this year’s Britcar Endurance Championship.

Richard admitted where his motorsport passion stems from, “I was fairly obsessed with motorsport since I was little. I played with toy cars. Also, my Dad was heavily into motorsports. We watched Formula 1 and he exposed me to racing as he collected motorsport items. When I was younger, my Dad would read me the headlines from Autosport when the magazine came out on Thursdays. I loved watching Michael Schumacher race. I just started karting at 12 which is a bit late for a professional driver but one of my friends invited me along for his birthday party and I have loved it since then.”

When asked about the inspiration for Racing Pride, Morris mentioned, “Being gay in karting and when I was starting out in motorsport. Particularly in motorsport, I felt that I didn’t fit the image of what a racing driver should be. I didn’t see any gay racing drivers. There was no role model for me. It was kind of a macho kind of space. I wondered if I could be the type of person to fit into the sport. As I started to come out, I found racing a difficult environment to come out in. It was something that worried me. It didn’t start well in karting as people didn’t want to know about it. I would hear things around paddocks and someone even wrote abusive language on my kart. So I carried on in the sport, but never talking about it.”

In 2009, Richard raced in TKM Extreme Karting where he placed 5th Midland Championship and was a race winner at Shenington Kart Club. Then, Richard contributed massively as captain of the Cambridge University Automobile Club from 2010 to 2017. The Brit was awarded the only second ever Cambridge University Full Blue for Motorsport. He became a 4 x winner in the British Universities’ Karting Championship with over 20 podium finishes in the British Universities’ Karting Championship and is a 4 x Oxford-Cambridge Motorsport Varsity Race winner, with 7 consecutive podium finishes.

During 2011 to 2016, Richard participated in 250 Gearbox Karting where his success included finishing 2nd in the English Championship 2016 and 3rd in the British Open Championship 2016. Richard revealed, “When I started F4 in 2017, I had a fair amount of success. I enjoyed the racing but didn’t feel as though I could open up to anyone. It was at the end of 2018, I felt the need to do something to promote change in the sport.”

It was in 2017 that Morris made a move to the Formula Ford 1600 Castle Combe Championship. He was categorised in Class B accomplishing 9 races, 8 pole positions, and 4 wins. By 2018, Richard drove for Swift Cooper in the BRSCC Formula Ford 1600 British National Championship. Apart from missing numerous rounds because of financial woes, Richard finished 2nd in class in both the National Championship and the Tourist Trophy. He achieved 4 race wins, 10 podium finishes, 4 pole positions, and 4 fastest laps from 16 starts.

Morris noted, “Once I gained a bit of status in my career it was a chance to redefine myself, and I wanted to be myself. I was taking it more seriously. It became a big incentive to come out and change things a bit. Then rainbow laces started appearing in November. Motorsport wasn’t doing anything. It seemed a bit wrong. I think it was needed but also I didn’t think it was fair on motorsport to be seen as a sport that doesn’t include people. Especially because there are loads of people in the sport that are welcoming and embracing everyone. Racing Pride created something that’s directly related to motorsport and promoting a more inclusive environment within it.”

The History (and future?) of The Triple Crown

Richard shared how he’s most looking forward to having much more fan interaction. He said, “It was sad to exist in bubbles where only essential staff could attend races during Covid. Motorsport is a big opportunity and privilege. I want to share that with people. I love having guests in the garage and more.”

Richard stated, “Racing Pride is still growing quickly. Recently, Racing Pride announced a tie-up with Racing Mentor to provide a scholarship to an LGBT+ driver, provide training and sponsorship information. This opens up opportunities for people who may not be able to access the necessary information. Racing Pride is keen to greatly expand internationally and reach out to other disciplines within the motorsport community.”

Also, Richard Morris is working closely with Motorsport UK by chairing the LGBT+ part of the broader Equality, Diversity and Inclusion Committee since December 2020. One aim is to train officials, marshals, clerks, and club organisers throughout Motorsport UK on how they can do their bit to create an inclusive environment and support people from diverse backgrounds.

Racing Pride is a dynamic movement supported by Stonewall UK, to positively promote LGBTQ+ inclusivity through motorsport and eager to connect with any organisations or individuals, within or outside of motorsport, interested in promoting visibility, acceptance, and inclusion. It’s time for there to be a variety of role models in motorsport to include everyone across motorsport and beyond.