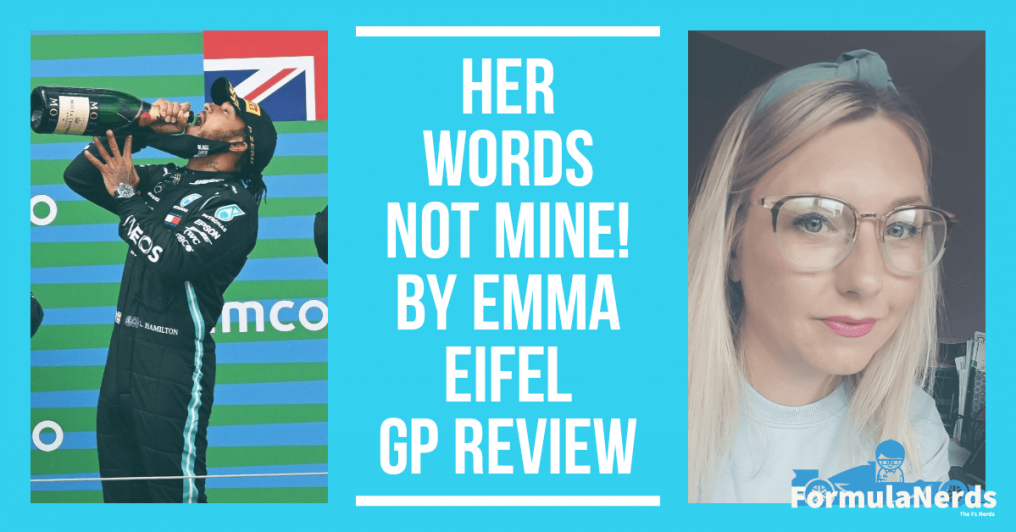 This career defining moment was made even more special for the British driver, as Michael’s son Mick, who is currently leading the F2 championship standings, handed him Schumacher’s Mercedes race helmet from 2012 as a memento of this incredible feat.

“I don’t know what to say” said an elated Hamilton. “When you grow up watching someone and you idolise them, really, for the quality of the driver they are and what they are continually able to do as a driver and with his team week on week. Seeing his dominance for so long and I don’t think anyone- especially me- thought I would get close to this record,”

“It’s an incredible honour but I could not have done it without this incredible team. A big thank you and huge respect to Michael.”

I never would have thought we would see this record broken by another driver in my generation, but Lewis Hamilton is on the verge of becoming the greatest driver of all time and I am so happy that I am here to witness it. I am a Hamilton fan, more so on the track than off it, and my passion for the sport started in Hamilton’s rookie year back in 2007. I have watched him win his 91 races, I have watched him fight on track, lose on track, win his six world titles and more importantly, watch him grow into this power house of a driver that we all love.

Many fans would disagree, many fans would say that he has had the dominant car or has had team mates that haven’t really challenged him. I would say the same about many a world champion. I could say the same about Sebastian Vettel or Michael Schumacher who both had dominant cars in their eras as champions. Hamilton brings something special on to the track, his race craft is something that many young drivers admire. Love him or hate him, you cannot deny what a great race driver he is and that is why I watch Formula One. I do not care that he has a fashion line, I do not care that he may have produced some music, his number one job is to race, and he does a phenomenal job at doing so.

By winning at the Nurburgring, he was also able to extend his lead in the driver’s standings to 69 points over his team mate, Valtteri Bottas after the Finn retired with a power issue. We were ready for a fight between the two drivers as they battled for the lead on the first lap, with Bottas coming out on top. Starting to buckle under the pressure of seeing Hamilton in his mirrors, Bottas handed the lead to Hamilton in lap 13 after running wide. The rest was history in the making.

The race threw up a few surprises. Nico Hulkenberg made a last minute return to the grid before qualifying to join Sergio Perez at Racing Point after Lance Stroll fell ill. The German took an impressive 8th in the race after starting last. I don’t think even Hulkenberg himself thought he would see himself in the points, but it really was a credit to him to have been pulled in last minute and raced at a circuit that Formula One has not visited in seven years to grab some points.

Even Romain Grosjean stole a point. I know, how did that happen? But well done to the Frenchman, he pushed hard despite nearly breaking a finger while driving at 200 kph. 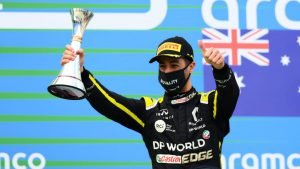 But my driver of the day I have got to say is Daniel Ricciardo. It was a result that was a long time coming for the Aussie and it was the first podium for Renault since the Malaysian Grand Prix in 2011. With Renault making steady progress with the development of the car, and Ricciardo having an incredible season so far, it was a matter of time before we saw Ricciardo on the podium again and oh how I have missed him! After starting in 6th position, he gained a place at the start by taking advantage of Alex Albon’s unfortunate lock up and by lap 9 he was in 4th after going round the outside of Charles Leclerc. He was on a mission. He pitted early on which worked in his favour and leap frogged several cars in front. What an absolute hero!

The weekend at the Nurburgring may have lacked the action we normally see at this iconic circuits but it was a day of surprises and records broken. We head to Portugal in less than two weeks time knowing how spicy this midfield battle is now becoming. Ricciardo moves up to 4th place in the standings, 10 points clear of Mexican driver Perez, who had a fantastic weekend by all accounts. McLaren sensation Lando Norris is just 3 points behind Perez closely followed by Albon and Leclerc. It really is all to play for in the midfield and it just shows how one race can change everything. With Bottas retiring, it allowed Mighty Max Verstappen to gain an advantage over him, closing the points gap to just 14 points. The race for 2nd in the championship is most definitely on!