Eifel GP: Cold weather could make for a challenging race at Nurburgring

It has been seven years since Formula One raced at the Nurburgring, and this iconic circuit could host one of the coldest races on record this weekend as we head amongst the Eifel mountains for the 11th race of the season.

With the forecast suggesting that we can expect very cold, wet and windy conditions, this weekend is set to be not only challenging, but full of action. We have no recent experience of this unforgiving track, having last raced here in 2013 when Sebastian Vettel took the top step of the podium. The cold, autumnal weather in Germany, teamed with the lack of data, could make a race weekend set up very tricky indeed.

The Nurburgring is one of the old school circuits and remains a favourite with many race drivers. Sitting in the Eifel mountains, the grand prix circuit is part of a bigger motorsport complex which includes the legendary Nordschliefe track. Once nicknamed “The Green Hell” by Sir Jackie Stewart, many became victim to this relentless circuit, including the late Niki Lauda. It was here in 1976 that the Austrian suffered his horrific accident in his Ferrari, and that was the last time Formula One raced at Nordschliefe.

Mercedes team boss, Toto Wolff, described the excitement in the team heading into the weekend. “We’re very excited to go back to the Nurburgring,” explained Wolff. “It’s an iconic race track that plays an important part in Mercedes racing history. It’s where the legend of the Silver Arrows was born in 1934 and we are very proud to have added a few chapters to that rich heritage. The Nurburgring also brings back some personal memories for me. I watched my very first race here at the track- it’s where I fell in love with motor racing.”

In 1984, the Grand Prix circuit was built into the complex and through the years we have seen various modifications to the track. Now at 3.1 miles long, it still retains that old classic feel. We know the Nurburgring to be full of slow and medium speed corners, directional and elevation changes and it requires a fairly medium downforce set up on the cars. Throw in some cold, wet and windy weather and you have a complex race, which could give us a few surprises. The main focus will be on the tyres. Pirelli will be bringing 3 middle of the range compound tyres to Germany, which will be well suited to the demands of the circuit. There is a high risk of graining as the drivers will be racing hard on cold tyres, so any safety car restarts will be extremely challenging with tyre temperatures.

This should spice things up for the race, especially now that there is a real championship battle in the midfield. McLaren’s Lando Norris currently sits in 4th position in the standings, but has Red Bull driver Alex Albon hot on his heels just a point behind him. Even though Albon will be looking at chasing that 1 point gap ahead of him, he will need to make sure he finishes ahead of everyone’s favourite Aussie Daniel Ricciardo, who has had a sensational last few races to pull back points. The Renault driver sits one point behind Albon and will be pushing to take 4th in the standings. Despite Ferrari’s woes this year, Charles Leclerc has held onto 7th and is level on points with Canadian driver Lance Stroll. The Racing Point driver is only one point ahead of team mate Sergio Perez, despite the Mexican having one weekend off due to Covid-19. There will be guaranteed racing and plenty of action in the midfield as the teams jostle for points, but elsewhere on the grid we could see a record breaking race as championship leader Lewis Hamilton is on the cusp of equalling Michael Schumacher’s record of 91 Grand Prix wins. His team mate Valtteri Bottas stole the win from him at Sochi, denying him of the chance to beat the record at Schumacher’s home race. It will be a tough feat with not only Bottas desperate to prove himself, but with Max Verstappen looking super competitive, we should see some stylish racing up at the front too. 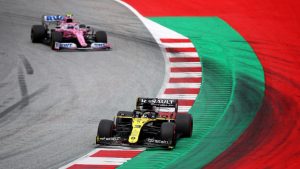 The Nurburgring is guaranteed to showcase some wheel to wheel action this weekend. It has produced some of the greatest races in history and has created some iconic moments. Who can forget Frenchman Romain Grosjean almost clinching his maiden Formula One win back in 2013 until the unfortunate timing of a safety car left him in 3rd? Or Johnny Herbert winning for Stewart Racing back in an eventful 1999 season during very changeable conditions after only leading 16 laps of the race? The race will be an all round test for the car and the driver, and with the weather due to be cold, wet and windy, we are in for a thrill ride.