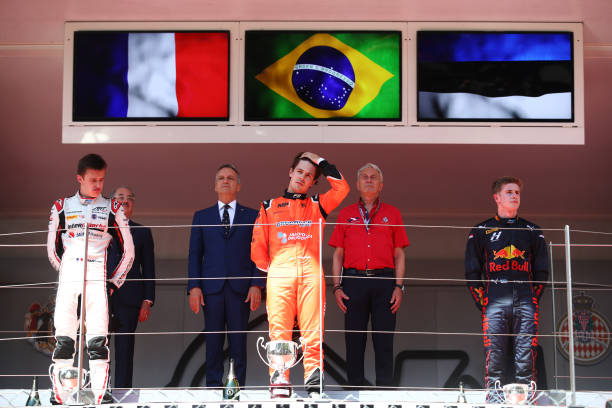 Drugovich vs. Pourchaire: Who will become the next Formula 2 Champion?

The Formula 2 championship has been led by two drivers, and either of them could easily win

Felipe Drugovich and Theo Pourchaire have dominated the Formula 2 season more than any other drivers.

Just 21 points separate the MP Motorsport driver and the ART Grand Prix driver, who are first and second in the standings respectively. Then, 49 points behind them is Logan Sargeant in third.

Unless something wild happens (which is not outside the realm of possibility in this series), one of the top two will be crowned the 2022 champion.

Which driver has performed better so far, and which one is more likely to take the title? Let’s take a look and find out.

As one of the more experienced drivers in the Formula 2 field, the pressure was on Drugovich to perform in his third season. He qualified tenth for the first round in Bahrain, which put him on pole for the Sprint Race. A slow start, however, saw him slip down and finish fifth. Sixth place in the Feature Race announced him as a consistent, although not flawless, driver.

But if fifth and sixth weren’t consistent enough, Drugovich qualified on pole the next round before finishing third and first in both races. In Imola, he had his worst qualifying of the season so far with 12th place. But he still managed to finish fifth and tenth in the races, scoring points twice.

It was UNI Virtuosi’s Jack Doohan who took pole the following round in Barcelona. But it was the MP Motorsport driver, starting tenth, who won both races that weekend. Drugovich started on pole for the Sprint Race and took his first win of the weekend. Then, a strategy call on Sunday saw him make the leap from tenth to first and claim his second win in a row.

Drugovich’s only retirement came the following round in Monaco. After qualifying on pole, he suffered a puncture in the opening laps of the Sprint Race. When he made an emergency pit stop the team made the gamble to put him on slick tyres. There was only a sprinkle of rain on the track and that quickly dried up, but Drugovich was prohibited from changing tyres again. Several penalties for speeding in the pit lane later, he retired from the race.

This horrendous race was only a small blip in the Brazilian driver’s title fight. He won the following race from pole, and went on to score five consecutive top-five finishes.

The ART Grand Prix driver was a title favourite going into the season, and he did not disappoint. While he retired from the very first race of the season, he went on to win the Feature Race and took the championship lead.

His worst weekend came in the next round, in Saudi Arabia. Pourchaire struggled mentally, having had a big incident at the Jeddah Corniche Circuit in late 2021. His car had an issue in Qualifying which forced him to start 20th for both races. He made it up to 13th in the Sprint Race but retired from the Feature Race with another mechanical problem.

This weekend was the only one where Pourchaire didn’t score any points. He recovered quickly from a bad weekend by taking his second Feature Race win of the season at Imola. Since then, he’s only had three non-points finishes, one each in Baku, Austria, and Hungary.

He also has only qualified outside the top ten one more time since then, in Baku. A tricky qualifying session put him only 12th for both races, but he managed to score a few points in the Sprint Race.

Pourchaire has outscored Drugovich in every round since Silverstone, although often not by much. This trend is encouraging for the French driver, who was elated after winning the Feature Race in Hungary right before the break.

With just two DNFs and four non-points finishes to his name this season (one more than Drugovich), Pourchaire has all but matched his rival in consistency.

The Formula 2 drivers have four rounds left to fight for the championship, the first three of those following in the coming weeks. Then, they’ll have a two-month break before the final round in Abu Dhabi.

Consistency will be key in the final rounds, and both Drugovich and Pourchaire will likely play it as safe as possible. One small incident could be the difference between winning and losing.

Either one of them could very easily take the Formula 2 title. But going by previous results and consistency, Drugovich has the better chance. He’s taken fewer risks than Pourchaire and been rewarded with more consistent points finishes. He’s only finished outside the points once, and with just one retirement to his name this season, that means there have only been two races where he didn’t score points. That’s 18 points finishes, 16 of them top fives.

While Pourchaire has undoubtedly put in some of the best performances we’ve seen in Formula 2, it’s hard to see anyone matching the level that Drugovich has been on this season.

Watch these two drivers (and possibly more) fight for the Formula 2 title in Spa next weekend, which kicks off the final four rounds of the season.