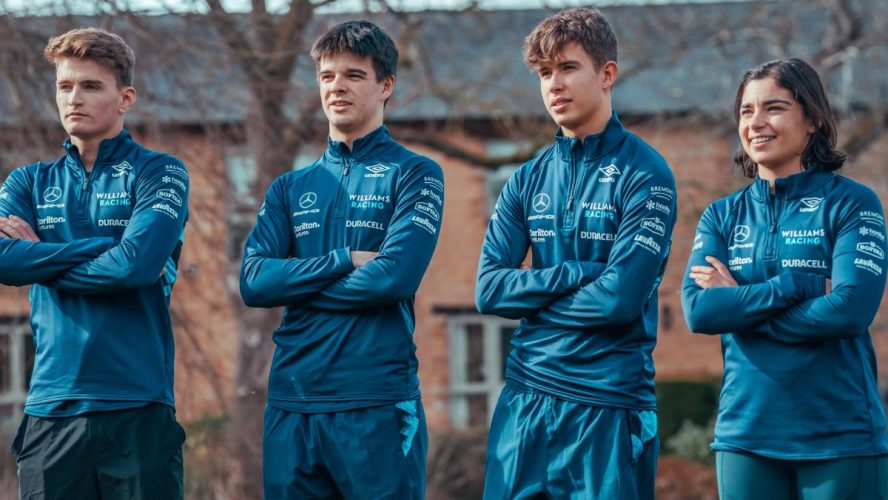 Does Williams have the best junior drivers?

Williams may be last in the Formula 1 World Championship, but their junior academy is thriving.

Between W Series, Formula 2, Formula 3, and the F4 British Championship, the Williams Driver Academy has seen more success than arguably any other junior academy this season.

Seven of the ten Formula 1 teams have junior academies that are currently in operation. These academies all house some of the best and most exciting young talent in motorsport, all the way from karting to Formula 1.

With the F1 feeder series getting closer to wrapping up, it’s time to take a look at how the Williams juniors are doing, and how their academy has performed relative to the others.

In 2019 Chadwick was the only driver to win more than one race, taking two victories on her way to the title.

W Series didn’t compete in 2020 due to the pandemic, but when it returned for 2021 so did Chadwick. This year she was even more dominant, winning half of the eight races held that season. She had a lowest placed finish of sixth, the only race she wasn’t on the podium for.

Over halfway into the 2022 season, Chadwick has given a new meaning to the word “domination”. She finished second in the most recent race in Hungary, the first race of the season that she didn’t win. With four races still to go, Chadwick leads the championship by 75 points over Alice Powell.

All the same, Chadwick’s level of control over the series ever since its inception in 2019 proves her competence. She’s a contributor to the success of the current Williams Driver Academy, and their most decorated member as far as titles go.

At the beginning of the Formula 2 season, most people were expecting the Red Bull Junior Academy to be the one at the forefront. After all, the two drivers at Prema, the reigning team and driver’s championships, are both Red Bull juniors.

But it’s been a disappointing year overall for drivers like Jehan Daruvala, Dennis Hauger, and Liam Lawson. Daruvala is the highest placed of the four Red Bull juniors, but he’s only fourth in the overall standings.

Roy Nissany has been a member of the Williams Driver Academy since 2020, and has been in Formula 2 for longer than that. But while he’s only one penalty point away from a race ban, the driver that’s bringing the Williams name glory in Formula 2 is the rookie, Logan Sargeant.

The American driver signed with Williams at the end of 2021 and joined Carlin in Formula 2 after three seasons in Formula 3. It was a bit of a slow start for Sargeant, but two pole positions and two consecutive Feature Race wins later on in the season saw him jump up to third in the standings.

Ahead of the final four rounds, Felipe Drugovich and Theo Pourchaire sit on top of the standings, with Sargeant trailing 40 points behind. He has a comfortable lead in the rookie championship, and a chance at grabbing the Formula 2 title itself if things go his way in the final races.

His performances so far have earned him the chance to make his Formula 1 debut, driving in FP1 at the United States Grand Prix later this season. He’s even been rumoured as a possible replacement for Nicholas Latifi for 2023.

O’Sullivan is the only Williams junior driver in Formula 3. Even though he’s only 11th in the standings, he’s been one of the most impressive rookies so far. He’s been racing with Carlin, a team that has never scored more than 46 points in one season of Formula 3.

Despite driving for a team that often lacks pace, O’Sullivan has had plenty of it. He took his maiden pole position and the team’s third-ever podium in Silverstone earlier this season.

With three rounds still to go, Carlin is set for their best-ever finish in Formula 3. They currently sit seventh in the team’s standings, with 46 points (matching their record). O’Sullivan has scored all 46 of those points, marking himself as a driver to watch for the future.

Formula 3 has been dominated by the other driver academies, with Isack Hadjar of Red Bull’s junior team currently leading the standings. Alpine’s junior drivers, Victor Martins and Caio Collet, sit second and eighth overall, with Ferrari’s Arthur Leclerc and Oliver Bearman in third and fifth respectively.

On paper, O’Sullivan hasn’t stood out as much as his rivals who are fighting for the title, or the other F1 juniors. But the performances he’s put in at a backmarker team, such as making up 18 places to finish fourth in Hungary, are indicative of talent that hasn’t been able to fully showcase itself.

Gray currently sits second in the F4 British Championship. He’s only 41 points behind the championship leader, and over 50 points clear of his closest rival.

The British driver has scored points in every race bar two (both retirements). He also has a total of 11 podiums out of the 18 races completed so far in the season.

His closest rival is McLaren’s only junior driver, Ugo Ugochukwu. Both of them drive for Carlin Racing; for anyone keeping track, that’s three of Williams’ five juniors that are currently racing with Carlin.

Gray recently became one of ten drivers nominated for Autosport’s BRDC Young Driver of the Year Award, along with Chadwick. The only other driver nominated that belongs to a different F1 junior academy is Bearman.

Several academies, like Mercedes’ or McLaren’s, don’t have enough drivers high up in the feeder series to stand out like Red Bull, Alpine, or Ferrari. All three of these teams’ junior drivers are competing at the top of at least one series, and all boast some of the best young drivers on the planet.

While Hadjar leads the Formula 3 championship and is doing so quite impressively as a rookie, the Red Bull junior academy as a whole has been plagued by poor results and bad luck for much of the season.

Ferrari’s Driver Academy has some stand-out performers, with both Leclerc and Bearman in the hunt still for the Formula 3 title. Further down the feeder series ranks, they have Dino Beganovic leading the FRECA championship, with Rafael Camara performing at the top of Italian F4 and the ADAC F4 Championships.

Alpine’s juniors have been successful as well, with Martins and Collet in Formula 3, and Jack Doohan in Formula 2. Doohan currently sits ninth in the championship, but like Sargeant has two poles and two race win to his name. Olli Caldwell is the other Alpine junior also racing in Formula 2, but won’t be competing in the next round at Spa due to accumulating enough penalty points for a race ban.

While Chadwick is easily the best driver in her category, that hasn’t necessarily been true of the other Williams juniors. Sargeant isn’t even the highest placed F1 junior in Formula 2, with Pourchaire being a member of Sauber’s academy. Nissany is 17th in the Formula 2 standings, and O’Sullivan is 11th in Formula 3.

But while not all the Williams juniors have commanded their respective field, as a group they’ve put in more impressive performances than arguably any other junior academy this season.

Academies like Red Bull have suffered from some poor results, while other academies simply don’t have enough drivers to stand out. All the while the Williams juniors have been putting in impressive performances, some showy and some quietly consistent. It’s highly likely they’ll be winning at least one category this season, if not two or three.

It’s a sign of hope for Williams’ future that they have so much talent in their academy. Hopefully, we’ll see some of that talent in Formula 1 in the coming years.