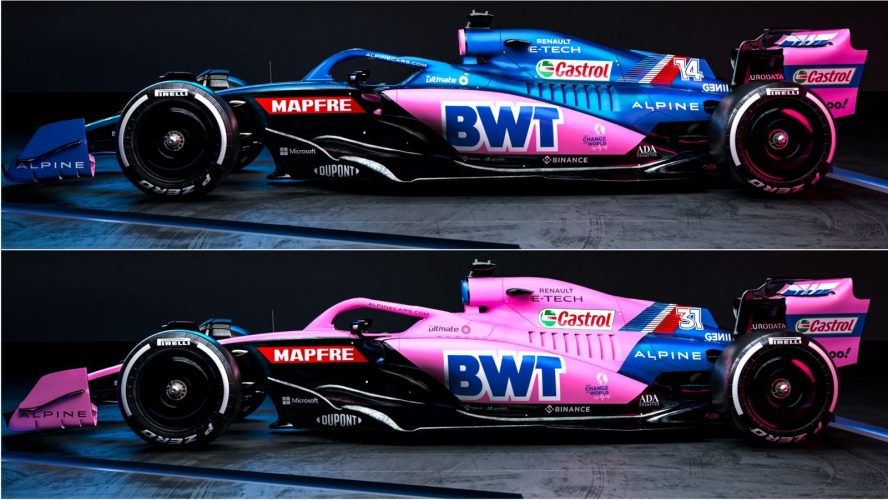 Formula One teams were not always as we know them, and this time we take a deep dive into Alpine’s origins.

Recently, Alpine has been rebranded from Renault but the team goes way back in its roots. We’ll take a look at how Toleman started the Alpine Formula One history.

It featured one of the best drivers to ever drive in Formula One, before becoming Benetton. That team also featured drivers that wrote their names down in history before it was taken over by Lotus.

From there it moved on to become Renault until it was rebranded as Alpine, to push the French car manufacturer name forward. So how and why did the French side go through such changes?

Toleman was the very beginning of Alpine, entering Formula One in 1981. The team started 70 Grands Prix but is not one of the most successful teams.

They never won a championship. In their five years running, they managed one pole position and finished a race with the fastest lap twice. Toleman will perhaps always be remembered for kicking off Ayrton Senna’s career in Formula One.

He spent one year with the team – 1984 – and gave them three podium finishes. The first one came in Monaco, when he finished second, the best-ever finish for Toleman. He then managed two other podiums as he finished third in both Silverstone and Estoril, Portugal that year.

Other than that, the season was not how Senna hoped it would go. He had eight DNFs, including his debut which was at his home Grand Prix in Brazil. The turbocharger failed during lap eight and Senna was forced to retire from the race.

San Marino was the only Grand Prix for which Senna didn’t qualify, throughout his whole career. There were two causes: tyre issues and a fuel-pressure problem. He also missed out on the Italian Grand Prix that year, after Toleman suspended him because he was in breach of his contract. Senna was discussing 1985 opportunities with Lotus, who at that time had their own team.

In May 1985, Toleman received major sponsorship from clothing company Benetton, which previously sponsored Tyrell and were also a major sponsor of Alfa Romeo at that time. That is when the team was rebranded as Benneton Formula.

The team started off with a BMW engine, thanks to Rory Byrne who developed the B186. In 1987, Benetton signed a long-term deal with Ford and saw many great drivers represent the team.

Thierry Boutsen finished fourth in the championship in 1988, and Alessandro Nannini took sixth in 1989 – the season he won the controversial Japanese Grand Prix. That race saw Senna get disqualified after he cut the chicane and caused a collision with Alain Prost. The French F1 legend won the championship that season with McLaren Honda.

But back to Benetton, Flavio Briatore took over as team principal, and for them, they had three-time World Champion Nelson Piquet racing too. Having won the last two races of the 1990 season, Benetton finished third in the Constructors’ Championship. But the team’s best was yet to come.

The arrival of Michael Schumacher brought hope to the team – that they can finally win a championship. It was not until 1994, the year of Senna’s tragic death, that the German finally won a championship for Benetton. That year saw a huge battle between Schumacher and Damon Hill following several incidents including:

Schumacher still triumphed thanks to his one-point advantage.

A year later, he did it all over again but this time Benetton switched to a Renault engine. Nine race wins saw Schumacher win another title. A good effort added by Johnny Herbert won Benetton their first and only Constructors’ Championship.

After that, it all went downhill though. Ferrari wanted to sign the two-time World Champion and how can someone decline an offer from the Scuderia? The brains of Rory Bryne and Ross Brawn followed Schumacher to Maranello. Renault pulled out as engine providers and Benetton’s run in Formula One was nearing the edge.

In 2000, Renault decided to take over the team and fully rebranded it as Renault F1 Team in 2002.

The team was looking ahead toward championship wins. They started out with Jenson Button but dropped him in 2003 to make way for Spaniard, Fernando Alonso. In 2004 they dropped Jarno Trulli to have Giancarlo Fisichella make part of the driver duo.

During a time in which Ferrari and McLaren were so strong, Renault rose above them all to win two consecutive championships in 2005 and 2006.

2005 saw Fernando Alonso become the youngest-ever Formula One World Champion at that time, at 24 years 58 days. The team achieved 15 podiums and seven wins to go above McLaren by nine points and also take home the Constructors’ Championship.

A year later, history repeated itself despite pressure from Ferrari. The title race went down to the last race in Brazil. Fernando Alonso and Renault had done it once again and won the title, this time by a five-point lead.

But the Spaniard’s time at Renault ran out and he left to join McLaren in 2007. Renault lost their magic touch, and although he returned in 2008, he only managed two victories all season long. 2009 was no better, it can be said that it was even worse. They only managed one podium finish and they had to deal with race-fixing allegations following Nelson Piquet’s crash in Singapore 2008. Piquet crashed on purpose to bring out a safety car and guarantee his teammate the win.

The team was put on probation and most of it was sold to a Luxembourg-based investment group called Genii Capital.

In 2011, Lotus came along to help the team recover.

Lotus Group bought a huge part of the Renault team and went by the name Lotus Renault GP. On the other hand, Tony Fernandes led a Malaysian consortium to bring in Team Lotus into F1, and so Lotus Renault GP was running up against them.

There were many clashes between both teams, with lawyers involved, especially since both teams had Renault power units. To make things worse, the team also had Robert Kubica pull out of the season after he suffered a nearly fatal crash while racing a Skoda Fabia in the Ronde di Andora. The year after, it was announced that Lotus will be running as Lotus F1 Team, while Fernandes acquire Caterham.

Lotus kept running with a Renault engine and had drivers such as Kimi Raikkonen and Romain Grosjean drive for them. But Renault were not well prepared to enter the hybrid era and the Lotus E22 only brought the team 10 points that year. That is why Lotus turned to Mercedes in 2015 for a new power unit and Renault branched out to create another Formula One team.

On September 28, 2015, Renault announced that they were working towards taking over Lotus F1 Team, as they were having talks with Gravity Motorsport – owned by Genii Capital. The takeover would see them competing in Formula One in 2016 as Renault Sport Formula One Team.

Red Bull Racing became an engine customer till 2018. Controversy over the Renault engine was surrounding the paddock, after the disappointing results, it brought to both Red Bull and McLaren. The 2018 season saw some drama between Red Bull team principal Christian Horner and Renault team principal Cyril Abiteboul.

While Red Bull decided to get their power from Honda for the 2019 season, Renault were in talks with their driver, Daniel Ricciardo. The Aussie was seeking a challenge away from Red Bull, who had their focus on Max Verstappen. Renault also lost customers McLaren, who partnered with Mercedes to provide their engine.

The team did not celebrate huge success over the years, but at the Eifel Grand Prix in 2020, Daniel Ricciardo achieved a third-place finish. It was the first podium since Malaysia 2011.

In September 2020, Renault announced that they will be racing as Alpine F1 Team in 2021.

Alpine and Renault had previously worked together in F1, but the real deal came in 2021. The team not only rebranded to put the Alpine name forward, but they also brought back one of Renault’s best-ever drivers, Fernando Alonso. The Spaniard had once left the sport in 2018, finishing his career off with Renault themselves.

Alpine’s time in Formula One has been full of ups and downs so far, but it is very clear that the French side are well in the midfield battle. Alonso and his teammate, Esteban Ocon, are often seen challenging the likes of Lewis Hamilton and the pair work together to bring the team some points.

In the 2021 Hungarian Grand Prix, Alpine wrote their name down in history as they recorded their first-ever win in Formula One. Not only, but they won with a French driver, Ocon, who also celebrated his first victory in the sport. It was the first win of a French driver in a French car since Alain Prost’s win for Renault in Austria 1983.

Fernando Alonso also got a chance to once again shine on the podium, having finished in third in the first-ever Qatar Grand Prix in 2021.