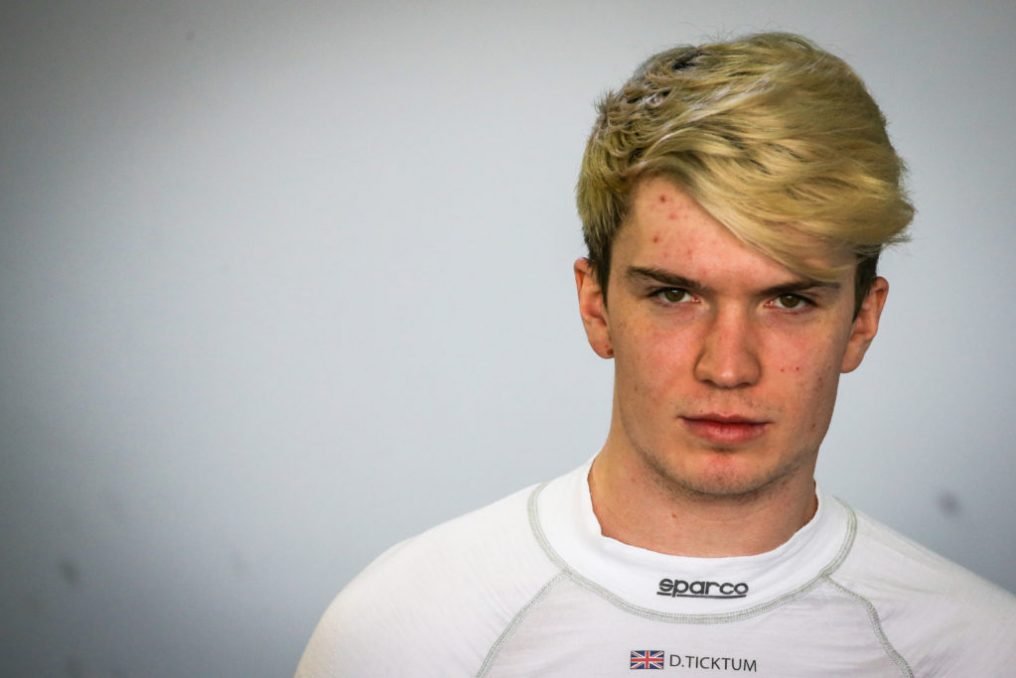 It was announced today (3rd August) that Dan Ticktum has been sacked from the Williams young driver programme. This is the second time he’s lost his junior seat with a team as he was dropped by Red Bull at the end of 2019. Throughout his career he’s faced a fair few controversial moments, let’s take a look at some below.

Ticktum actually had a very strong and promising karting career. He won titles in nearly every competitive year, beating the likes of Lando Norris along the way. He was consistently the best performing rookie whenever he moved series and racked up an impressive trophy haul. This would surely lead him to a long and trouble-free career, right? Wrong.

It all began to go wrong for Ticktum in his first series following the move from karts to cars. He was competing in MSA formula and once again got off to a strong start, leading the championship after the early rounds. He began to fall behind rivals such as Lando Norris as the season progressed however, but all good drivers would use this setback to motivate them forwards. Ticktum did indeed use this setback to motivate him forwards, but this ‘forwards’ was the act I am about to describe, rather than the more ideal metaphorical meaning.

During the penultimate round of the season, the race was neutralised following an accident and a safety car was deployed, slowing the field down for safety reasons. One of the clearest and simplest rules in motorsport is that saying you cannot overtake under a safety car. Ticktum decided to ignore this rule 10 times over, overtaking 10 rivals and punted his rival, Ricky Collard, off the road. Needless to say, no one was very impressed with his actions, and he found himself with a two-year ban from motorsport, one year of which was suspended on the condition he didn’t commit further offences. I’m not really sure how he was meant to re-offend given he was banned, but hey ho.

He returned to motorsport in 2016. Despite not exactly being the most receptive of the media, he actually had a controversy-free couple of years. His good driving was rewarded with a place on the Red Bull driver programme, with the initial intention being that he would replace Daniil Kvyat for the 2019 or 2020 F1 season.

During a stint in the FIA European Formula 3 Championship, Ticktum received yet more bad press as he lost the championship to Mick Schumacher. Schumacher and his Prema team dominated the second half of the season, and a somewhat salty Ticktum publicly expressed his thoughts that there may be something fishy going on, probably not the best idea. He made his displeasure for losing this championship known on social media, he went on a bit of a rampage, accusing some fans that disagreed with him of having a ‘m*cropen*s’ and calling Schumacher fans ‘butthurt’. Obviously, Christian Horner was rather annoyed by this and was quoted saying that he ‘sometimes engages mouth before brain’.

Ticktum was later dropped from the Red Bull programme, officially due to poor results, but an inside source tells the Formulanerds it was for ‘arrogance and attitude’. He was picked up by the Williams young driver programme at the start of 2020.

Following various campaigns in 2018, he signed up to race in F2 in 2020 for DAMS. The season was by no means a failure for Ticktum, but his erratic driving style and somewhat fruitful comments over the team radio gave him a lot of unwanted press.

Following a switch to Carlin for 2021, Tiktum’s questionable attitude remained. Despite this, however, he is clearly a very talented driver. His wheel to wheel combat has greatly improved and his instincts are such that comparisons to many top drivers have been drawn.

Ticktum made no secret that 2022 was his last chance to get into Formula 1. Following the recent news of him being dropped from Williams (due to an F1 seat not being available for 2022), that door now looks firmly shut.

His final bit of controversy is in some ways his worst and comes just days after he was informed by Williams that their relationship would be no more. Ticktum often streams on Twitch, but this particular stream went a little too far…

While waiting for a game to load, Ticktum started singing ‘Latifi is poo’ to the tune of ‘What’s new Scooby-do?’. Following this he went on to say how Latifi doesn’t deserve his F1 seat, essentially implying that he is only in his current position due to paying his way there. I’m no public relations expert, but given you are desperately trying to get a Formula 1 seat, insulting the guy in the seat that you currently want probably isn’t the best idea. This comes at a terrible time too, given Latifi recently scored the majority of the teams 10 points achieved at the Hungarian Grand Prix.

So, Ticktum definitely isn’t a bad driver, but his presence outside the car has ground his career to a halt, and he faces an uphill battle if he wants to achieve his dreams of racing in F1.