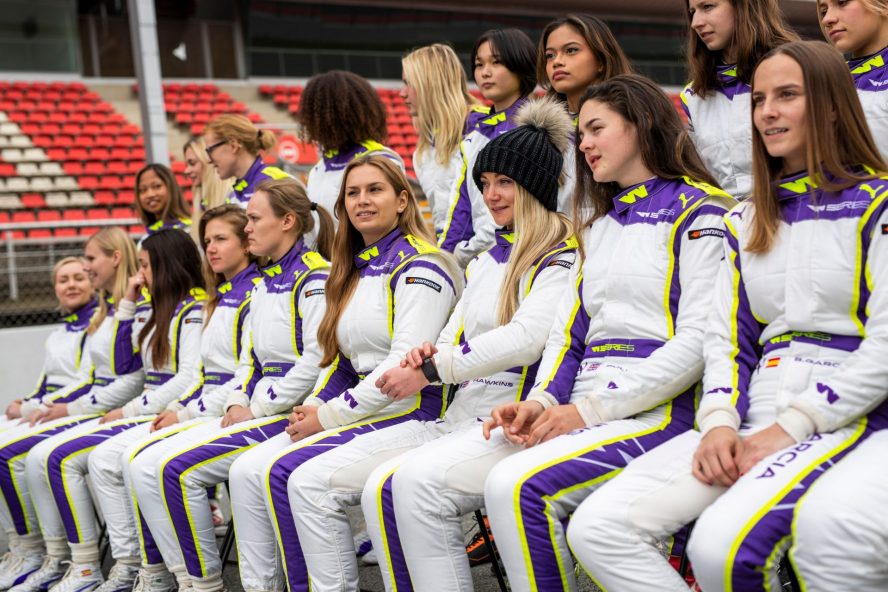 The new plans to race in Singapore open up opportunities...

The W Series calendar has evolved since the creation of the championship to include more races and continents. As the 2022 season is now close to the finish line with only four races remaining, drivers start to look at their future and the possibility to progress into the upper levels of motorsport. Could the calendar of the Series also be a key point in securing a seat?

W Series’ main purpose has always been declared as the ability to provide opportunities for female drivers to access higher levels of motorsport. Certainly, chances to continue to race are given and the proof is the number of drivers present on the grid who declare they wouldn’t be able to afford racing without the W Series.

However, what has often been criticized as the biggest issue with the championship is the lack of progress after it.

Chadwick: “Such a short time to be able to secure a seat”

The career of Jamie Chadwick must clearly be mentioned. Winning the W Series title in 2019 and 2021, the Brit was unable to secure herself a seat for 2022 in either Formula 2 or 3. Effectively, the reason explained by Chadwick was not so much the inability to find a seat but rather the possibility to find a competitive team in order to have a positive long-term impact on her career. The 24-year-old instead chose to retain her seat in W Series and is now on her way to winning her third title with a simply dominant season.

Why then has no team granted her a seat for a season in F3 or F2? As explained by Chadwick herself to FormulaNerds at the beginning of the year, the timing of events wasn’t quite right: “I relied on winning the championship to have any hope of progressing. Perhaps I think maybe I could’ve looked still in advance but by the time the season finished and we went looking, it’s such a short time to be able to secure a seat or budget and I had already missed the testing in F3 at that point.”

After the first seven races of the season, the 2022 Championship of W Series is now coming to an end. Before the winter break, however, the next stops are Singapore (30 September- 2 October), Austin (21 – 22 October), and the Mexican double-header (28 – 30 October).

The way the calendar is structured means a gap is formed between the previous race in Hungary back at the end of July and the next race at the end of September.

Moreover, the influence of the football World Cup causes the F1 calendar, which W Series is dependent on, to conclude the season earlier.

While the aforementioned problem of timing could be avoided this way, other issues may occur. Firstly, as shown by the 2021 F2 season, long gaps in the calendar tend to confuse fans and ultimately make them lose interest.

Also, while the timing was a problem, no secret was made that the actual main difficulty in securing a seat was finding the financial backing to actually compete in the FIA Championships.

The testing with Formula 3 follows a partnership with the championship that had already started last year with the test for Irina Sidorkova and Nerea Marti and continues to highlight the will not only to give a chance to the W Series drivers to showcase their talent but also to provide the means to fully understand the differences between the single-seaters.

As explained by Formula 3 CEO Bruno Michel in the announcement: “It’s very important to us to ensure that more and more female drivers join our championship. Diversity is one of our key discussions regarding the future of motorsport.

“We initiated these dedicated F3 tests last year, with Nerea Martí, Doriane Pin, Irina Sidorkova and Maya Weug, who all said how beneficial this one-day test had been to their understanding of the demands of our championship. We selected four new drivers for this year, as we follow closely not only W Series, but also female drivers in other categories.

“The purpose of this test is not to compare their performance, but it is an opportunity for them to understand what is required from an F3 driver from every aspect, so that they can prepare for the challenges when they progress to our championship, hopefully in the near future.”

Domenicali: “A key priority for all of us”

Support for the F3 test was also given by F1 CEO Stefano Domenicali: “Providing more opportunities for women drivers across single seater racing is a key priority for all of us at Formula 1 and across the whole sport. This test, the second of its kind, will provide real opportunity for these four talented drivers to demonstrate their potential to teams and make the case for a competitive seat in years to come.”

While the return of Tatiana Calderon on the F2 grid shows diversity in the sport, the question now is how long will we have to wait to see a W Series driver progress further?