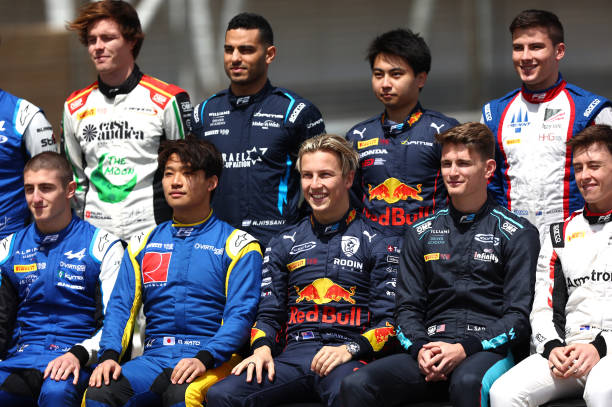 BAHRAIN, BAHRAIN - MARCH 17: The F2 Class of 2022 drivers pose for a photo during previews ahead of Round 1:Sakhir of the Formula 2 Championship at Bahrain International Circuit on March 17, 2022 in Bahrain, Bahrain. (Photo by Lars Baron/Getty Images)

Could Formula 2 Have A Rookie Champion This Year?

Three of the five existing FIA Formula 2 Champions have won the series in their rookie year. Charles Leclerc, George Russell, and Oscar Piastri are all names everyone knows. But if you want to find out where the rookies stand in the current Formula 2 standings, you have to go all the way down to ninth place to find the first one.

There’s still more than half the championship left to run. Formula 2 is anything but predictable, so there’s still plenty of time for one of the rookies to come out of the shadows and win the title. But which ones have the best chance?

The current highest placed rookie in the Formula 2 standings is DAMs’ driver Ayumu Iwasa. Only three rounds in, the Red Bull junior is already well known for his quick race pace. Despite starting last on the grid for the first race of the season, he made his way up to finish eighth, scoring points on his Formula 2 debut.

Qualifying sixth in Jeddah and second in Imola, Iwasa has proved he has the pace to be a rookie in contention for the championship. But, it’s clear he still has a lot to learn. A mistake in his first-ever Formula 2 qualifying session can be excused, but as the season goes on drivers have to become more and more careful about not making errors. One small slip up can cost a driver the championship, so Iwasa has a long way to go.

Logan Sargeant, driving for Carlin, sits just outside the top ten in the standings. The American driver almost beat Piastri to the Formula 3 title in 2020, but due to financial issues he had to stay in that category for 2021 before he was signed as a Williams junior driver and promoted to Formula 2.

Sargeant has been fast in his first couple of Formula 2 weekends, qualifying fourth in the opening round of Bahrain. But like Iwasa, he has a lot to learn before he can properly challenge for the championship. His struggle has namely been tyre management, often struggling for pace at the start of races.

17th place in the standings isn’t exactly reflective of the season that Jack Doohan has had so far. After all, the UNI-Virtuosi driver was the first polesitter of the season. But despite clearly being a fast and talented rookie, Doohan has yet to score more than three points in a single race.

Three rounds into the season, the top eight drivers in the standings are all non-rookies. Currently, Theo Pourchaire leads Felipe Drugovich and Jehan Daruvala. Liam Lawson and Richard Verschoor complete the top five, and are both easily contenders for the Formula 2 title.

As a whole, it’s clear the rookies don’t have the upper hand in this season of Formula 2.With ten rounds left there’s still everything to play for. With so many races left, the order could completely flip from what it is now, and everyone is still in contention. But it’s also safe to say that most title contenders have already presented themselves in some form.

None of the rookie drivers in the fight can be fairly counted out. But they’ll be hard-pressed to follow in the footsteps of Leclerc, Russell, and Piastri.