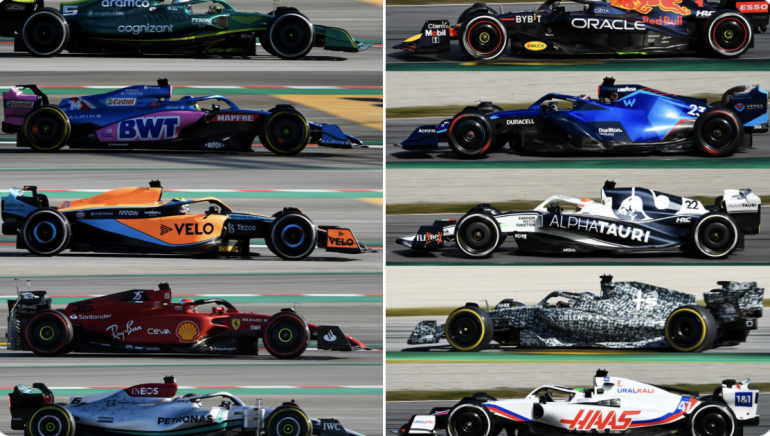 The Biggest Changes To Know On The 2022 New Cars

As we head into the new season, it’s a new era with multiple changes aligned to airflow on the 2022 cars.

Prominent features changed include the front wing, rear wing, floor, wheels and fuel all contributing to how the cars are  constructed and race on the track.

The front wing is simpler when making contact with air as the flow moves across aerodynamic areas. There are higher endplates and a gap removal between the nose and elements named the ‘Y250 vortex’.

The Y250 vortex are spinning air vortices established by the inner tips of the previous elements, closest to the nose that directs this air towards the bargeboards and from the floor. This helped to keep the airflow near the car’s floor clean but created a difficult situation for any car behind. Think about visibility. With its removal, it should be easier for cars to follow and race closer.

Then the rear wing endplates have been curved to join instead of intersecting at sharp angles. This reduces the amount of air accumulating off the corners of the wing. While the additional beam wing lessens pure downforce, it allows for more underside performance.

As the airflow is in a more controlled environment, ground effect comes into play. Air is accelerated and creates a low pressure forcing the car downwards on the track driving performance and works better for the car behind. Following this, Pirelli 18-inch rims aim to limit the aerodynamic inefficiencies to allow better wheel and tyre performance. Small winglets were introduced on the front wheels curving over from the inside to clean the airflow.

During last year, fuel was composed of 5.75% bio-components. From this year, there’s a switch to E10 fuel consisting of 10% ethanol. The fuel must be second generation and manufactured in a sustainable way. How the fuel interacts with the power unit will be monitored by all the power unit performance teams.

Since the car weight increased from bigger wheels, there were improvements for chassis safety requirements. Now the chassis must absorb 48th% more energy in the front and 15% more at the rear. The requirements have to flow for each team chassis’ to be approved to run on track. Additionally, the nose section is longer to dispel energy in potential crashes.

For the final pre-season testing morning session, George Russell took the fastest time with a 1:19:233 despite five red flags. There were two separate accidents from Fernando Alonso’s hydraulics issue to Pierre Gasly crashing at Turn 5 resulting in front wing and suspension damage. At the afternoon session, Lewis Hamilton achieved the fastest time with a 1:19:138. Mercedes came out strong.

Let’s see what happens at the next pre-season testing from 10-12 March in Bahrain.