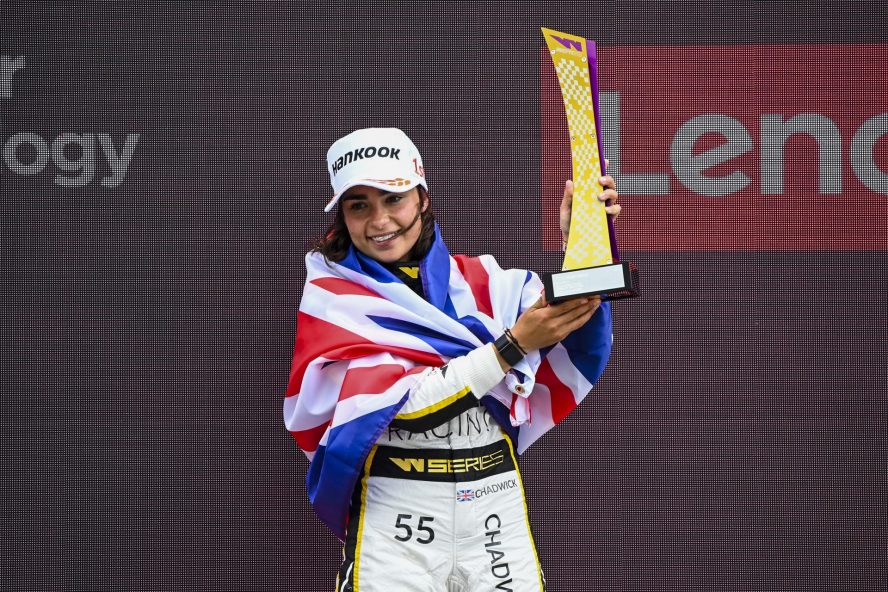 The 2-times Champion reflects on her dominance within the Championship

2-times W Series Champion Jamie Chadwick continues to maintain her dominance within the Championship, while her win in Silverstone keeps her stat of having won every race so far in 2022. Yet, the Brit doesn’t expect the second part of the season to be as easy…

The main claim made about Chadwick lately is that she is now too dominant in W Series. Effectively, the statistics speak for her: 16 podiums in 18 races entered, never outside of the points, two titles, and a current winning streak that saw Chadwick claim the victory in every race so far this year.

Asked by the Independent about her “out of league” performance, Chadwick however refused to consider her performance unmatched: “It doesn’t really [resonate with me]. I was fortunate today to get a good first lap in with everyone battling behind and preserve the gap. The nature of the championship, because it’s only one race a weekend, it looks on the face of it like it’s all kind of falling into place more than it is.”

By Liam Ploetner1 day ago

No win was easy according to Chadwick: “I’m still definitely constantly being pushed really hard and I have no doubt that the rest of the season is still going to be just as hard. I think I’ve come into this year feeling really hungry for it and just wanting to do the absolute utmost and the best I can to try and get results week in and week out, and I’m really happy so far that’s how it’s gone.“

Look out for Abbi Pulling

If anything, with younger drivers growing experience and confidence in the Series, Chadwick’s advantage in experience is destined to run out as per the Brit’s opinion: “I can’t underestimate how much more experience I have than some of the other drivers in the championship, especially some of the younger ones like Abbi. With the nature of the short weekends, they’re quite fast-paced, practice, qualifying and just one race it makes it difficult.

So naturally, I think the rest of the season and even going into next year these guys, especially Abbi, are going to really make big improvements and be the ones that are hard to beat. No doubt about that, but I’m going to use the experience I have as an advantage for now and keep my nose ahead.”
While discussing Chadwick’s experience, however, it is impossible not to mention how, while the Brit has a lot more experience than her fellow W Series drivers, at the same time lacked the opportunities and experiences, according to W Series CEO Catherine Bond Muir, that were given to male drivers her age, who are now affirmed in other Championship, including F1 drivers Lando Norris and George Russell.
Yet, Chadwick is currently doing anything she can to show she deserves her place in the upper series of motorsport and, with W Series growing popularity (during Silverstone the goal of a one million UK TV audience was reached), Chadwick’s success cannot be overlooked any longer.  Can 2023 be finally a good year for her to progress further?
Image Credit: W Series Press Office