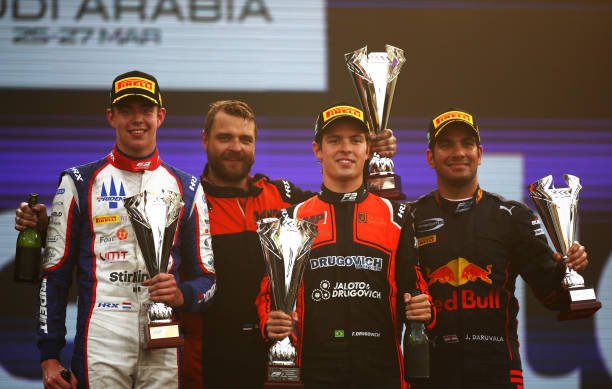 The CEO of Formula 2 and Formula 3 has expressed his excitement to see drivers that are not connected to Formula 1 academies succeed in the first two rounds of Formula 2.

Formula 2 has seen four different winners this season so far. Two of which have no affiliation with a Formula 1 Driver Academy.

This week in a Virtual Media Roundtable, Bruno Michel, CEO of F2 and F3, commented on their performance. When asked by FormulaNerds who had impressed him this season, he said Drugovich “had an absolutely fantastic weekend in Jeddah.” Michel continued by saying it is “important to underline” Drugovich’s success. He added that it is “interesting” to see Verschoor “doing so well” too.

Michel was also asked by FormulaScout about Drugovich and Verschoor’s lack of affiliation with any Formula 1 teams and how this contributes to their impressive performances.

Michel was adamant about one fact:

“It shows one thing for sure: you don’t need to be a part of an academy to shine.”

Why is it uncommon for non-academy drivers to win?

The last non-affiliated driver to win Formula 2 was Nyck de Vries in 2019. But de Vries was no stranger to F1 Academies, having split from Mclaren’s programme the year prior after eight years with the team.

Since FIA Formula 2’s inception in 2017, there have been five champions crowned. The (at the time) un-affiliated De Vries, two Ferrari Juniors, a Mercedes Junior, and most recently Oscar Piastri, an Alpine Junior.

The simple fact of the matter, as outlined by Michel, is that F1 academies sign the young drivers who have the best results.

There are exceptions, as seen so far in the Formula 2 championship this season. Two of the drivers in the top three are not connected to an academy.

“I think it proves that you don’t need to be a part of an academy to do a good job” said Michel.

It’s clear that the Formula 1 teams are looking for the best of the best. So, it’s a surprise to see such talented drivers like Drugovich and Verschoor performing at the top of the feeder series ladder without any connections.

Too much of a good thing:

There is a lot of talent within the F1 feeder series. Only seven of the ten Formula 1 teams have active driver academies. With the large number of drivers in lower categories, there is plenty of talent to go around.

Some academies, like Sauber, McLaren, and Mercedes, opt to sign one or two drivers and nurture them closely and personally. Other teams, namely Ferrari and Red Bull, choose to sign as many drivers as possible.

Having a large number of drivers in your talent pool might seem like an ideal situation. But Michel points out that this can cause problems.

“Now you also have some academies that have too many drivers sometimes, and they are in a situation where they don’t know how to arbitrate between one driver and another because they have two or three drivers that are very strong in Formula 2 or in Formula 3. That’s something that happens, and then who do you support?”

It’s possible Michel is not so subtly hinting at Red Bull’s Junior Team this season. The F1 team has a whopping five drivers currently racing in Formula 2, and a further two in Formula 3.

Ferrari also had five drivers in one season of Formula 2, during the 2020 season. But between now and then, that number has dropped to zero. Ferrari is clearly happy with their Formula 1 line-up for the foreseeable future. They no longer have a need to keep such a large number of drivers ready to step in.

Why Bother With an F1 Academy?

It’s clear that drivers like Drugovich and Verschoor can comfortably prove themselves as championship frontrunners without the benefit of an F1 team to help them. So why bother with one?

The answer is clear: outside of a driver academy you have almost no chance at getting promoted to Formula 1.

The top step of motorsport currently only has room for 20 drivers. Getting a seat in any capacity is difficult. With most teams having driver academies, should Red Bull, Mercedes, or Ferrari have an empty seat, they’ll fill it with someone within their academy.

Even with the benefit of a driver academy, it’s still difficult to find a spot in Formula 1. For example, the 2021 Formula 2 champion Oscar Piastri still doesn’t have an F1 seat, despite his talent and connection with Alpine. However, Michel told FormulaNerds that Piastri’s “time will come”.

Without the connection to an F1 team, drivers like Verschoor and Drugovich have little chance of making it to Formula 1, even if they win the championship.

“Is it going to be more of an issue for them to go to Formula 1 in the future? That’s the real question that they need to ask themselves” said Michel, who understands the massive benefit of being a part of a Formula 1 academy.

Michel ended his statement on the matter by reaffirming his support of drivers like Drugovich and Verschoor. “I’m really happy to see drivers outside Formula 1 academies do well, and I hope it continues.”