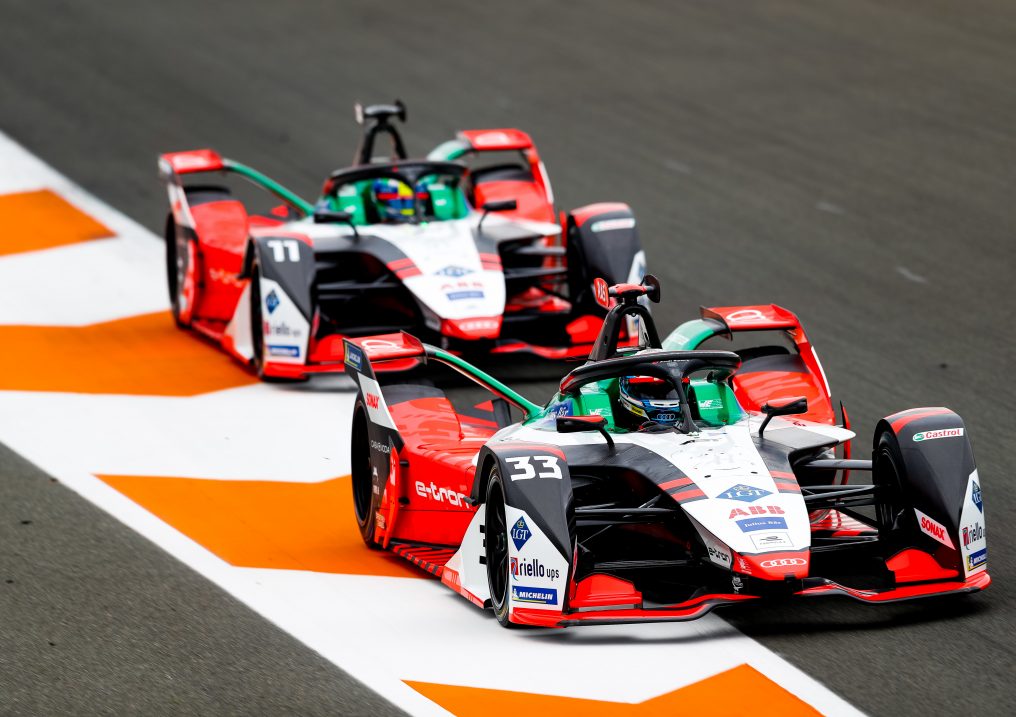 The German car manufacturer has been involved since the start.

Audi was a founding member of the FIA Formula E Championship and is now set to exit this weekend.

As one of the longest-serving Formula E teams, Audi’s contributed significantly after seven successful seasons in Formula E alongside ABT Sportsline and Schaeffler.

Daniel Schuster, motorsport communications spokesman for FIA Formula E told FormulaNerds, “As the Audi Sport ABT Schaeffler team, we have been involved in Formula E since the first race in 2014 and have played a major role in the development of the series.”

The fact that Formula E is now staged as an official FIA world championship shows the enormous importance Formula E now has in international motorsport.

Despite the factory farewell, Audi has a motorsport history going back to 1881. Audi has raced in all competitions including World Rally Championship, Pikes Peak, Super Touring, Deutsche Tourenwagen Masters, World Endurance, GT racing, and Formula E.

At first, Audi partnered with ABT Sportsline in 2014/2015. Audi claimed their first victory in Beijing to become a regular front-runner. Then Audi collaborated with Schaeffler in 2015/2016. Schaeffler designed a new powertrain to improve car performance. The following year, Brazilian racing driver, Lucas di Grassi won the title at the Montreal E-Prix.

In 2017/2018, Audi adapted their suppliers and relaunched their own Formula E team cars. Audi took over the ABT Schaeffler direction with a full factory. On 27 September 2017, the Audi e-tron was unveiled. With racing legend, three-time 24 Hours Le Mans winner, three-time American Le Mans winner, and 2013 FIA World Endurance Champion, Allan McNish as team principal, Audi went on to win the Team’s Championship. During 2018/2019, Audi committed to supplying a customer team and factory unit with Virgin Racing which sped up their Spark SRT05e powertrain use.

Allan admitted as team principal, “We’re coming to Berlin to say goodbye to Formula E and to our fans with our heads held high. Lucas and René have competed in many races in Berlin and have both been on the podium. We as a team have experienced some of the most emotional moments here in recent years. So it’s the perfect place for the final chapter of our Formula E adventure, which we obviously want to end with as many trophies as possible.”

Formula E acts as an opportunity for 12 teams, 24 cars, and 24 drivers to enjoy electric vehicles through sustainable mobility racing for a better and cleaner future around the world’s most iconic cities.

By Gracie Talia Ross18 hours ago

Being one of the world’s largest carmakers, Audi tested cutting-edge technology in Formula E race cars. With two rounds left to the competitive season, Audi will end Formula E on a high note.

Daniel declared to FormulaNerds, “I wouldn’t say that it was time to leave the sport. The future-oriented alignment of our motorsport strategy was much more a decision for the Dakar Rally instead of a decision against Formula E. We still see huge potential in Formula E but the Dakar Rally offers us more opportunities to develop new technologies and to prove our claim of “Vorsprung durch Technik” under the most extreme conditions. Our goal is to become the first manufacturer to achieve overall victory in the prestigious Dakar Rally with an electrified drivetrain.”

Schuster suggested to FormulaNerds, “Audi Sport, ABT and Schaeffler have been partners in multiple motorsport categories including but not limited to Formula E. Although our factory-backed program in Formula E is coming to an end, this does not mean that we won’t cooperate in the future again.”

If there’s greater freedom to develop new technologies at other racing rallies, might other major manufacturers pivot too?!

Daniel denoted to FormulaNerds, “I can only speak for Audi, and for us, Formula E was the perfect place to accompany our transition towards electric mobility. Today Audi is electric and we are accelerating change even more over the years to come. With our new engagement in the Dakar Rally, we are looking for the next big chapter in our motorsport strategy. But this doesn’t mean that this is the same route for everybody.”

This weekend from 14-15 August, 18 world-class grid racers accompanied by 12 teams and 10 manufacturers will take on the tough Tempelhof Airport circuit at the Berlin E-Prix.