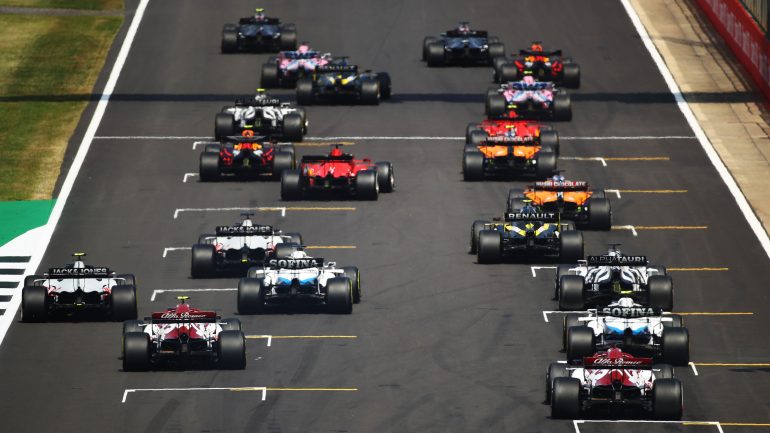 NORTHAMPTON, ENGLAND - AUGUST 09: A general view of the grid at the start of the race during the F1 70th Anniversary Grand Prix at Silverstone on August 09, 2020 in Northampton, England. (Photo by Bryn Lennon/Getty Images)

Are gambling sponsorships the new tobacco?

Over the past few days, it has been announced that PokerStars has become an official sponsor of the RedBull Racing team. This isn’t the first gambling/ casino sponsor we have seen in F1 and it certainly won’t be the last.

F1 is a money sport. It survives through sponsors. That’s why so many cars in the 70s, 80s, and 90s had tobacco sponsorship. I myself have a ‘Marlboro Mclaren’ jumper-type piece. Tobacco advertising was an incredible earner for F1 teams and the super successful cars were great adverts for the cigarettes.

The tobacco ban in F1 was shocking. It was also one of Tony Blair’s great downfalls. Due to financial support from Ecclestone, Blair personally intervened to make sure F1 was exempt from the tobacco advertising ban. Most of us know how this ended- not very well for either party.

Anyways, with the ban in place, F1 was set to lose a lot of money. Whether that was F1 as a corporation or the individual teams, the lack of tobacco-related cash flow created a serious dent in many of the teams’ bank accounts.

We did see some teams try and get around the rules. Does anyone remember the barcode, Ferrari? Well, Marlboro had just signed a contract with Ferrari worth over $1 billion and they weren’t going to just roll over. So, the boys in Maranello and the Marlboro boss’ out their heads together and created the 2009 barcode Ferrari. Going at slow speeds, the car just looked like it had a bit of a whacky livery, but, when going at top speed, the barcode blurred and formed the Marlboro logo. Clever huh? Well, not that clever as they were found out pretty quickly and got into some hot water.

Anyways, we thought this was the end to addictive advertising in F1.

We’ve known for some time that gambling-related activities are highly addictive and can really hurt people’s livelihoods. However, with the increase in technology, it has become even easier to gamble. You can literally gamble at the click of a button.

Now I know I’ve said it’s dangerous but I’m not going to deny it- I place the odd bet. Obviously on the national, a few footy matches and certainly a few F1 races (thank you to Max for his pole-position in Abu Dhabi).

It seems like the perfect match. Big money companies looking to sponsor highly popular sports, it’s a win-win. Well, not always a win for the people that could be influenced by the advertising.

There have been previous partnerships that have involved the trading of NFTs and the comparisons of online casinos. However, there have been no “real” betting sponsors until 2020.

It started with 188bet becoming the official betting partner for Asian F1 in 2020. This partnership has originally been contracted to last until 2024.

Then we saw PokerStars become the official betting partner of European F1 in the summer of 2021. This partnership is set to last until 2023 and involves PokerStars having trackside advertising, virtual trackside adverts, and television adverts in between live coverage of an F1 weekend.

PokerStars have now joined Red Bull Racing for the 2022 season. While the deal is unknown, Christian Horner is reportedly “delighted”.

There has been very-early research into gambling and betting advertising. It has found, so far, that it is not nearly as harmful as tobacco advertising. However, as the rest of the sporting industry are trying to cut down on gambling advertisements, why does it seem that F1 are branching out and increasing their adverts and partners.

I can assure you, this won’t be the last we hear about gambling sponsors in F1. Let’s hope the harm really isn’t as bad as the harm caused by tobacco advertising. As the seasons continue, we will know more.