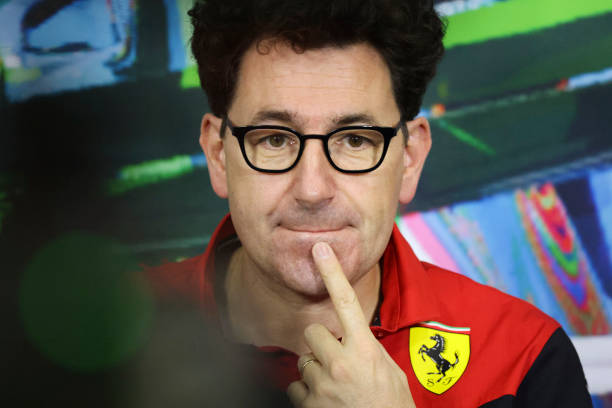 Are Binotto’s days at Ferrari numbered?

Many reports are suggesting that Mattia Binotto could be replaced as Ferrari team principal, starting next season.

Since then, it has been Red Bull and Mercedes dominance with the exception of Brawn GP winning in 2009.

In those years, Ferrari had some close years. 2010 saw Fernando Alonso lose the drivers’ championship, despite leading the championship going into the last race in Abu Dhabi.

Alonso also came close in 2012. The Spaniard took it to the season decider with Sebastian Vettel again. However, the German’s incredible comeback drive in Brazil was enough for him to become a three-time world champion.

It would then take until 2017 for Ferrari to make a competitive car. The Maranello team started the season strong with Sebastian Vettel winning in the first two races at Australia and Bahrain.

However, Mercedes were able to out-develop Ferrari, making it increasingly difficult for the team in red to keep up.

The same would follow in 2018 as Ferrari would once again win the first two races of the season. However, the Maranello team would have a mixture of mistakes between the team and driver.

This resulted in Mercedes once again taking the 2018 title as the Silver Arrows managed to out-develop Ferrari once again. This resulted in Lewis Hamilton finishing ahead of Sebastian Vettel in the drivers’ championship in 2017 and 2018.

During those years, Binotto was an engineer. The Italian’s job before getting team principal was the Chief Technical Officer at Ferrari. However, the Maranello team decided to replace Maurizio Arrivabene on 7th January 2019.

Ferrari would also have a change in driver line-up with Charles Leclerc swapping teams with Kimi Raikkonen for the 2019 season. The impressive rookie season at Sauber from Leclerc earned the Monegasque a seat next to Sebastian Vettel at the Scuderia.

The 2019 season saw Mercedes dominance yet again. Ferrari were only able to show race-winning pace towards the latter part of the season. Charles Leclerc managed to win the 2019 Italian and Belgian Grand Prix and Sebastian Vettel won the 2019 Singapore Grand Prix.

However, the 2020 season would be Ferrari’s worst season in years. The start to the year was cancelled due to the COVID-19 outbreak. This resulted in the Australian Grand Prix being cancelled and would have to wait until 5th July 2020 to get going in Austria.

Ferrari did not have a competitive car, causing lots of frustration throughout the Tifosi. Before the season even began, Mattia Binotto told Sebastian Vettel that the German would not be driving for the Scuderia in 2021.

This created a toxic environment within the team with Vettel losing motivation, wanting the season to be done with as soon as possible.

At the end of the 2020 season, Ferrari finished sixth in the constructors’ championship with Leclerc finishing eighth and Vettel finishing 13th. This was Ferrari’s worst season in Formula 1 in 40 years.

2021 saw Carlos Sainz replaced Sebastian Vettel at Ferrari. The Scuderia had a much better season than in 2020. The Maranello team were battling with McLaren for third in the constructors’ championship.

The Scuderia even came close to a win at the 2021 British Grand Prix. However, Lewis Hamilton managed to fight back through the field and overtake Charles Leclerc late on in the race.

Overall, it was a good comeback from 2020 as the Maranello team were making small steps to returning to the top, fighting for championships.

With a completely new set of regulations, now was the time to get it right for Ferrari to challenge at the front of the field. That it what exactly Ferrari did as they came out of the blocks flying.

At the season-opener in Bahrain, Leclerc battled with Verstappen for first place and managed to overtake the Dutchman to then comfortably win the race. Carlos Sainz also looked like he would overtake Verstappen also. However, the Dutchman retired from the race, confirming a Ferrari one-two in Bahrain.

Australia would see dominance from Charles Leclerc as the Monegasque won the race by over 20 seconds ahead of Sergio Perez. This dominant victory was helped by Verstappen yet again retiring from the race. After Australia, Leclerc had a 34-point lead over George Russell in second. Meanwhile, Max Verstappen was down in sixth.

The start of the downfall

All things were looking good for Ferrari after Australia. However, things got more difficult for the Scuderia when Formula 1 came to the Emilia Romagna Grand Prix in Imola. Verstappen and Leclerc would have a great battle in the sprint race, ending in Verstappen taking the victory.

However, the race would show Verstappen having superior pace in first. Things got worse for Ferrari after Sainz’s lap one retirement for the second race in a row. Leclerc would lose control of his car and go into the barriers when fighting Sergio Perez for second place. Instead, the Monegasque finished in sixth.

After a close battle in Miami, Formula 1 would head to the Spanish Grand Prix. Leclerc was leading this race. However, the Monegasque’s engine cut out, forcing the 24-year-old to retire from the race and watch Verstappen win. This was crucial in the championship as Verstappen would take the lead of the championship for the first time.

Monaco would see Charles Leclerc claim pole position at his home race, aiming to win after lots of bad luck. However, in a rain-soaked race, Ferrari messed up the Monegasque’s strategy, resulting in the 24-year-old finishing in fourth.

Azerbaijan would be Ferrari’s worst nightmare. Both cars retired from the race with engine problems and would see Red Bull secure a comfortable one-two.

In Canada, Leclerc was forced to take an engine penalty, which was a worrying sign as it is early on in the season. The Monegasque would fight his way through the field from the back to claim fifth. However, Verstappen won yet another race.

The British Grand Prix saw Ferrari make yet another strategy mistake. Esteban Ocon retired from the race on lap 37, bringing out the safety car. This triggered all of the frontrunners, except Leclerc, to go into the pits to go onto the soft tyre. However, Leclerc stayed on the hard tyre and got eaten up at the safety car restart to finish fourth, whilst teammate Sainz won the race.

After a win in Austria, Leclerc was motivated to make a championship comeback on Max Verstappen. However, the Monegasque would crash out of the race early on, losing the rear of his car in hot conditions. Max Verstappen would end up winning the French Grand Prix.

Hungary saw another strategy error from Ferrari. The Scuderia had a great opportunity as Verstappen would start the race from 10th after having engine problems in qualifying. However, the Scuderia pit Leclerc onto the hard tyre, ruining the Monegasque’s race. The 24-year-old would end up finishing sixth with Verstappen winning yet again.

In Belgium, Leclerc had to pit early on in the race due to a tear-off getting stuck in the Monegasque’s brake ducts. This ruined the 24-year-old’s chance of a race victory. Therefore, Ferrari pitted Leclerc to get the fastest lap. However, Fernando Alonso got ahead of the Monegasque, ruining his attempt. To make things worse, Leclerc was given a five-second time penalty for speeding in the pitlane.

The races in Netherlands, Italy and Singapore saw Leclerc finish in the podium places. However, the Monegasque was still slipping away from Verstappen at the top.

After a rain-soaked Japanese Grand Prix, Max Verstappen was confirmed as the 2022 drivers world champion, making the Dutchman a two-time world champion. Sergio Perez forced Leclerc into a mistake on the last lap, ending in the Monegasque receiving a penalty.

There was some confusion as many, including Red Bull, believed that only half-points were going to be awarded as 75% of the race had not been completed. However, the FIA ended up giving full points after the race as the race did not end in a red flag.

Now Ferrari are fighting for second in the championship as Mercedes closed the gap to 19 points after securing a one-two in Sao Paulo. There is only one race left in Abu Dhabi to decide the constructors’ championship.

The 2022 season for Ferrari has been very similar to the 2017 and 2018 seasons in terms of being out-developed once again and making several mistakes.

Who could be Binotto’s replacement?

In an interview with calciomercato, an Italian Journalist name Leo Turrini believes that Mattia Binotto is under a lot of pressure, especially after Sao Paulo, saying:

According to La Gazzetta, current Alfa Romeo team principal Fred Vasseur is the most likely to replace Mattia Binotto at the Scuderia. The Italian outlet says the 54-year-old French engineer will replace the Italian, starting from January 2023.

The article says that the Ferrari CEO John Elkann is wanting to replace Binotto as the Italian has had four seasons to try and win Ferrari’s first championship since 2008. However, Binotto has failed.

The article has also stated about Binotto’s relationship with Ferrari driver Charles Leclerc. It has become apparent that the Monegasque is getting more frustrated throughout the season.

However, Ferrari have released a statement on Twitter, regarding La Gazzetta’s claims of Fred Vasseur replacing Mattia Binotto as Ferrari team principal in January 2023:

“In relation to speculation in certain media regarding Scuderia Ferrari Team Principal Mattia Binotto’s position, Ferrari states that these rumours are totally without foundation.”

Do you think Binotto will be replaced as Ferrari team principal for 2023? If so, who do you think will replace the Italian engineer?

Feature: Is Formula 1's Netflix docuseries the reason there's so much hate in the F1 community?

A brilliant article from @morganholidays

Stop blaming Drive To Survive for a problem it didn't cause

FormulaNerds.com — Features — Netflix’s Drive to Survive has long been a subject of debate amongst Formula 1 fans.