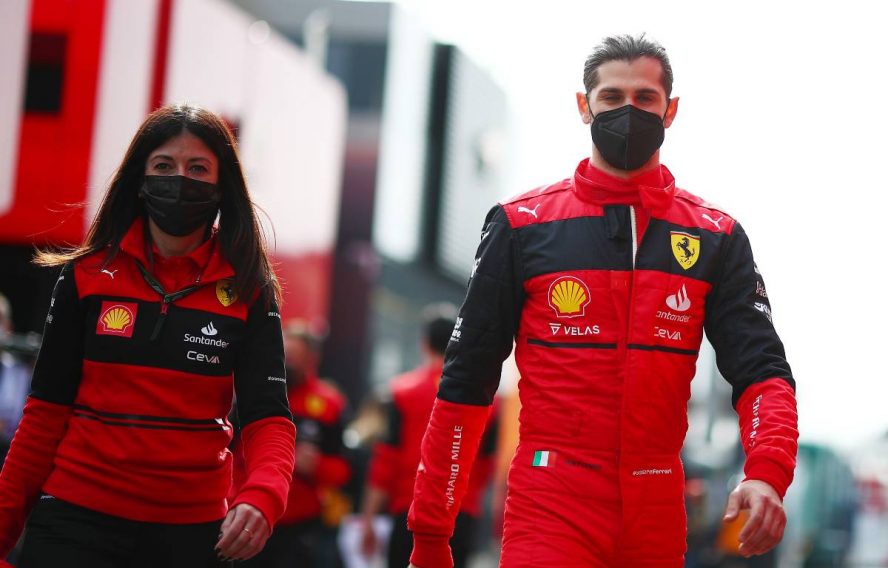 Antonio Giovinazzi will be taking part in practice sessions with Haas in 2022, but what about the young drivers on the sidelines?

Antonio Giovinazzi will be running the Haas VF-22 for a practice session in the Italian and American Grands Prix.

The 28-year-old will replace Kevin Magnussen and Mick Schumacher once each, but this will not be part of the rookie outings requirements. The teams are obliged to let a rookie perform a practice session at least twice throughout the season. This initiative gives young drivers coming into the sport a better opportunity to show their skills and also start getting into grips with an F1 car.

Giovinazzi is still a Ferrari reserve driver although he lost his seat with Alfa Romeo. This loss gained him a seat with Dragon Penske in Formula E in which he disappointedly finished the season with no points. In Round 14 of the London E-Prix though he did achieve his best qualifying position, third, but a penalty forced him out of the points.

Now that Haas are running a former F1 driver, it makes me think, “What about younger drivers?” There are many drivers who were not given a chance in Formula One and because of this, we lost them to other series. Other drivers, who maybe did not deserve it as much, took their place, so we never got to see drivers such as Callum Ilott and Sergio Sette Camara have a go at the ultimate dream.

Haas said that Ferrari requested the practice session just in case Giovinazzi is ever needed to step in. Ferrari are running a line-up made of Charles Leclerc and Carlos Sainz. Both drivers are trying their best to push for a championship win but some strategy calls and engine troubles got in their way of obtaining points.

As reported by Racer, Giovinazzi said, “I’m so glad to have the chance to drive again in official F1 sessions. Besides simulator driving, it is important to test a true car and I can’t wait to put my suit and helmet back on. It’ll be an opportunity to get confident with the new generation cars – it’s the best way to be ready if I were called as reserve driver.

“Driving on challenging and exciting tracks as Monza and COTA makes it even more thrilling. Thanks to Haas F1 Team and Scuderia Ferrari – I’m looking forward to giving my contribution to the team that counted on me already in 2017.”

“We’re happy to welcome Antonio Giovinazzi back to the team for the two FP1 outings. Ferrari were keen to give Antonio some seat time in a current-spec Formula 1 car on a race weekend and we were naturally happy to assist.”

He added, “We enjoyed a similar situation in 2017 with Antonio and Ferrari – the clear difference between then and now is the experience he’ll have gained competing for the previous three seasons in Formula 1 and the feedback he’ll be able to give us in Italy and America. I’m looking forward to seeing Antonio again and having him back in the paddock with us.”

What about young drivers?

It is no secret that for drivers to get a seat in F1, most of the time they need to have a good sponsor to carry them forward. It is a money sport and very unfair to some drivers that are more talented than others, but just do not have the funds to get where they want.

In my opinion, motorsport needs to look at better ways how they take care of their young drivers. Giving them the opportunity to take the car out during a practice session is just not enough because this can still lead them to nothing.

Firstly the fact that they cannot race in Formula Two again if they win seems pretty unfair to me. I get that they want a different champion to help other drivers shine, but why do drivers that already had an opportunity in Formula One, are given another chance? This happens when there are other drivers on the sidelines waiting for their turn to get in an F1 car.

This season, Alfa Romeo already ran Robert Kubica in a practice session and now Haas are about to run Giovinazzi. Theo Pourchaire, who’s only 18 years old, has already been linked with a future F1 seat with Alfa Romeo, but he is yet to be given a chance. He is still very young and it is understandable why he still doesn’t race in Formula One yet. But why doesn’t he get the chance to drive in a practice session rather than Kubica?

Some reported that it is because Theo wanted to focus on his F2 career rather than have it collide with Formula One test runs, but there are weekend were the two series do not clash together.

What if F1 doesn’t happen?

Nyck De Vries has been going with Mercedes for a while now, and we are yet to see him take on an F1 seat, while we lost Callum Ilott to IndyCar because he was never given the chance of having a seat.

Luckily, both of these drivers found somewhere to carry on with their motorsport careers and be successful, but what about others who do not? What about the ones that are so fixed on making it in Formula One, that when they do not they tend to go backwards rather than forward? I’m a football fan, and so that is why I will compare this scenario to when a 16-year-old player is let go of a club and then has to find something else to do with his life.

This affects their mental health and their take on life at such a young age, and this can happen to a young driver who is aspiring to take on Formula One too. Once a team lets him go, he is left on his own to consider what other options he has in his career, and for a young driver this can be challenging.

In football, Crystal Palace deployed a new initiative which helps footballers that are let go of consider other options that they have. Not only, but they are also given mental help so that they can cope with the reality of what happened.

In my opinion, the FIA should look at implementing some sort of programme for young drivers. Motorsport is different, and if a driver does not make it to Formula One, they can join another series. But they are human beings, and to come to terms with that can be difficult. That is why they would have a programme throughout their young career which will get them into grips already with other series, and also give them the opportunity to learn about other careers in motorsport. This would be very important, especially if a driver ever suffers an injury which leaves him not able to drive again.

This will help because if a driver, for example, does not make it to F1 from Formula Two, but looks to join Formula E, he will be better prepared. Formula E is a completely different sport because of the complexity of the cars, and drivers getting into it, find it pretty difficult to start with. This is one of the reasons why the series goes through many driver changes every year too.

Providing some support which gives the drivers a sense of stability will help their mental health and give them more motivation to look at places beyond F1. It will also motivate those coming from lower-class backgrounds to believe that they too have an opportunity to get into motorsport. Besides, shouldn’t it be available to all?