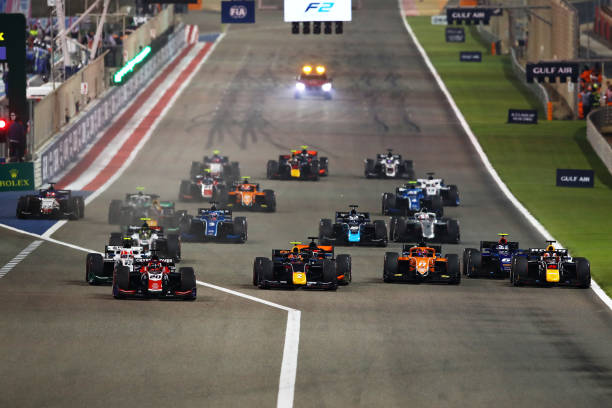 BAHRAIN, BAHRAIN - MARCH 19: Richard Verschoor of Netherlands and Trident (20) leads the field into turn one at the start during the Round 1:Sakhir Sprint Race of the Formula 2 Championship at Bahrain International Circuit on March 19, 2022 in Bahrain, Bahrain. (Photo by Joe Portlock - Formula 1/Formula Motorsport Limited via Getty Images)

The 2023 grid contains nine rookies, 13 return drivers, and a whole lot of talent

Dennis Hauger – Hauger is coming off of a rookie season he would have expected more from with PREMA Racing. He finished tenth in the standings, but after winning the F3 championship with the team, it’s safe to say he’ll be disappointed with that result. MP Motorsport took both the drivers’ and teams’ title in 2022, and Hauger will be hoping they’ll do it again in 2023.

Jehan Daruvala – It’s a fourth Formula 2 season for Daruvala, now without the backing of the Red Bull Junior Team. Also coming off a disappointing season with PREMA, Daruvala finished seventh overall in 2022 with just one race win. If he’s still clinging to hopes of F1, he’s going to need to win the title in 2023 to get the attention of a new team. However, his reserve role with Mahindra Racing in Formula E may prove the most likely path after F2.

Enzo Fittipaldi – Fittipaldi had a surprisingly impressive rookie season with Charouz, finishing in eighth (tied for seventh with Daruvala). His 2022 highlight was back-to-back podiums in Hungary. After a comprehensive demonstration of what he’s capable of, he’s joining Carlin this year to fight at the front. Don’t be surprised if you see him score his maiden Formula 2 race in 2023, and expect it sooner rather than later.

Zane Maloney – A late charger in the 2022 Formula 3 season, Maloney’s rookie season had a stellar ending. He scored a hat trick of Feature Race wins at the end of 2022, and finished as the series’ runner-up by just five points. It’s undeniable that the “boy from Barbados” is fast, but what can he do at Carlin in Formula 2? That’s what we’ll find out in 2023.

Theo Pourchaire – What was ultimately a disappointing season for Pourchaire in 2022, others might see as a success. The Sauber junior driver finished second to Felipe Drugovich in his second year of Formula 2, albeit by just over 100 points. While a switch to Super Formula was originally on the cards for the Frenchman, he opted for another season with ART in Formula 2 instead. In his third year he’ll be hoping luck finally comes his way, but either way he’s sure to be a title contender.

Victor Martins – The reigning Formula 3 champion is staying with ART to make his Formula 2 debut. Despite it being a close race to the title, the Alpine junior had an incredibly strong season, only finishing outside the points once in 2022. How will rookie Martins fare against the quick and experienced Pourchaire? That’s a question many can’t wait to find the answer to.

Oliver Bearman – In his rookie season of Formula 3, Bearman missed out on the title by seven points. He also beat his two more experienced teammates, finishing third in the standings to their sixth and seventh places. While PREMA didn’t have the best season in Formula 2 last year, Bearman is sure to be quick, and could very well be in the fight for the title if the team makes improvements from last year.

Frederik Vesti – Vesti moves to PREMA after completing his rookie season with ART. The Danish driver, also a Mercedes F1 junior, showed flashes of pace and performance throughout his journey to ninth overall. With a pole position, a race win, and back-to-back second places in Monza, Vesti has potential to get good results in 2023, but will need strong backing from PREMA.

Jak Crawford – After two seasons in Formula 3, finishing 13th and seventh respectively, the American Crawford is making the step up to Formula 2. He’s coming back to Hitech after a year with PREMA, and will be looking to impress in his rookie year against a fellow rookie teammate. Crawford is one of six Red Bull juniors on the 2023 Formula 2 grid, five of which are new to Formula 2, so seeing how he stacks up against his fellow F1 academy drivers will be something to watch for.

Isack Hadjar – It’s an all-Red Bull lineup for Hitech, with Hadjar taking the second seat at the team. While both Hitech drivers are Formula 2 rookies this year, Hadjar has the least experience of the two. In his rookie season of Formula 3, Hadjar finished fourth in the standings with Hitech, earning him a quick progression up the ladder. Will he stay just as quick in Formula 2?

Arthur Leclerc – Leclerc is leaving PREMA after two seasons in Formula 3 with the Italian team. He’s switching to DAMS for his rookie season in Formula 2 but will remain a member of the Ferrari Driver Academy. With an F1 academy watching his moves and the future of his career at stake, the pressure is already on Leclerc to do well in his rookie season.

Ayumu Iwasa – Iwasa was one of the fastest drivers on the 2022 Formula 2 grid, surprising onlookers after his nondescript Formula 3 season the year prior. The Red Bull junior is a top qualifier and already a race winner in the series. With a potential AlphaTauri F1 seat always up for grabs, Iwasa will need to iron out his tendency to make mistakes for 2023.

Jack Doohan – Doohan has already been touted as one of the top title contenders for 2023 after his rookie season in Formula 2. He scored pole position in the first weekend of the 2022 season and, although he wouldn’t take his maiden race win until Round 7, cemented himself as a promising driver. Now he has three Formula 2 pole positions and race wins to his name. Staying with the Virtousi team for 2023 was an obvious choice, and Doohan will undoubtedly be adding to his list of achievements this season.

Amaury Cordeel – It was a bit of a surprise to see Cordeel switch to Virtuosi racing after his disappointing rookie season with Van Amersfoort. Even more of a surprise was the announcement, which came around the same time that Belgian authorities had suspended Cordeel’s driver’s licence due to a speeding incident that had occurred months prior. It’s still unknown how, if at all, this news will affect Cordeel’s 2023 Formula 2 season.

Roy Nissany – Nissany is back for a fifth season in Formula 2, switching after two seasons with DAMS to the newly branded PHM Racing by Charouz. He’ll surpass 100 F2 starts this season, but with one podium in four seasons of the category, expectations for the Israeli driver might not be high. He does however, still have a turn of pace, and managed to score his most points in a season yet in 2022, coming tantalisingly close to a first win, at Imola. Nissany will provide valuable experience to the team in contrast to his rookie teammate.

Brad Benavides – Benavides, like several other drivers on the 2023 Formula 2 grid, joins after just one season in Formula 3. He’s one of three drivers who finished outside the top ten in the Formula 3 standings making the step up. It was a quiet year for him with Carlin, taking just one points finish in the whole season. But if there’s one thing to be said about Formula 2, it’s that you can never write anyone off.

Clement Novalak – Novalak is widely considered to be a consistently good driver, but his rookie Formula 2 season was a disappointing affair. While his teammate, Felipe Drugovich, won the title by a country mile, Novalak struggled to score points and finished 14th overall. Despite whatever struggles he had with MP Motorsport, he had good moments, like a podium in Zandvoort. Hopefully, he’ll find his stride again in 2023 with Trident.

Roman Stanek – Stanek is coming into his rookie season of Formula 2 with three years of Formula 3 under his belt. The Czech driver had his best season in 2022, finishing fifth with Trident and scoring a pole position, one race win, and three second places. Will it take him a couple of seasons to warm up to Formula 2 as well? Time will tell.

Richard Verschoor – Verschoor’s Formula 2 career has been a bit of a bumpy one so far. After completing the first six rounds of 2021 with MP Motorsport, he didn’t have the funding to continue with the team. Fortunately, he was able to come back for the final round with Charouz, before landing a full-time seat with Trident for 2022. Some pace issues saw him finish 12th in 2022, despite taking two race wins (disqualified from a third) and three second places. He’ll be hoping for more consistent results with VAR in 2023.

Juan Manuel Correa – Correa is making a full-time return to Formula 2 after a crash in 2019 caused him significant injuries. His is an incredible recovery story, making his way back up through the ranks to come back to Formula 2 once again. He even scored a podium in Formula 3 in 2022 with ART. It’ll be great to see him racing in the category once again, this time with VAR.

Ralph Boschung – 2022 was supposed to be Boschung’s last year in Formula 2. But after a neck injury put him out of racing for a chunk of the season, he wanted another shot at getting a good result. Despite the difficulties he faced in 2022 which involved missing almost half the races, Boschung managed to score two podiums and finish 15th overall. For what will be his final season in Formula 2 (for real this time), he’s sure to get some good results.

Kush Maini – Maini steps up to Formula 2 with Campos after one season in Formula 3 with MP Motorsport. While the Indian driver only scored points on four occasions, three of those were top-five finishes, and one was a podium. He’ll be one of nine rookies on the grid in 2023, all vying for the opportunity to take the Rookie of the Year award, or maybe even the title.