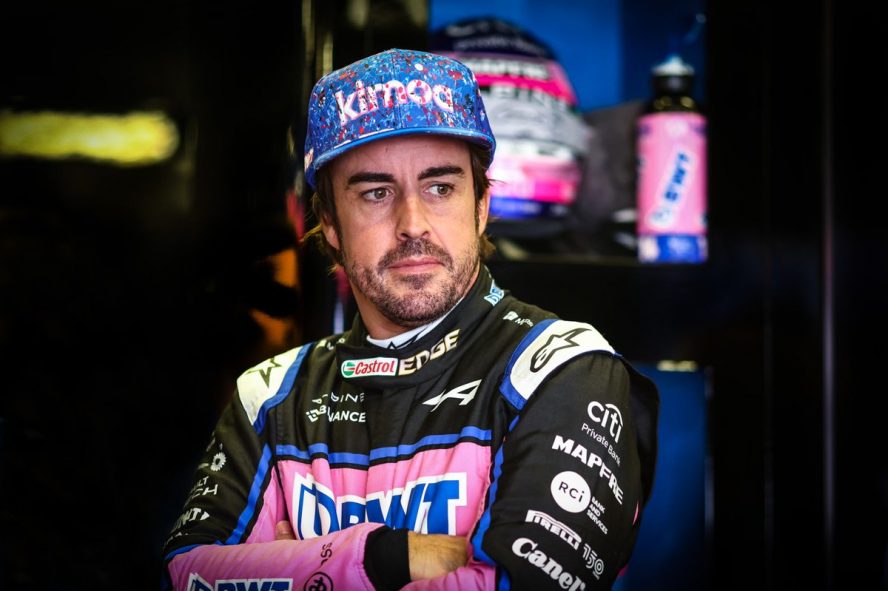 Fernando Alonso and Esteban Ocon’s incident-fraught weekend has exposed tensions at Alpine. With just one race left, and P4 at the constructors’ title at stake, has the team handicapped itself?

Alpine’s race weekend has been beset by problems between Alonso and Ocon. The sprint race saw two high-profile collisions. Ocon forced Alonso off the track at turn three on the opening lap, leaving his teammate no room. The cars collided but continued.  Alonso then attempted to pass him a lap later. In doing so he hit his rear right tyre, losing his front wing in the process. The resulting pit stops and penalties for both cars saw both drivers finish down the order. This compromised the starting places for the race on Sunday. Its rivals McLaren started in P5 and P11.

Team Principal Otmar Szafnauer criticised the drivers after the race, stating: ” Frankly both Esteban and Fernando must do a better job to compliment the fantastic efforts of everyone in the team by avoiding on track incidents”. Tensions rising within the team, Alonso said after the sprint “One more race and its over, finally”. The battle within the team for supremacy began to show after simmering beneath the surface.

In terms of a recovery drive, Alpine had a near-enough-perfect race. Recovering from P16 and P17, Alonso and Ocon finished P5 and P8 respectively. Alonso’s performance particularly impressed, the end of the race showcasing why he is a two-time World Champion.

Not content with finishing best of the rest, Alonso sandwiched himself amongst the top teams. Ahead of both Red Bulls, but behind the Ferrari of Charles Leclerc, Alonso’s P5 gives Alpine a real opportunity of securing P4 in the constructors’ championship. This is highlighted by McLaren’s implosion, falling 19 points behind its rivals with just one race to go.

But the tensions at the team never seem to be far away. As the Safety Car caused by Lando Norris’s stricken McLaren prepared to pull into the pits, Ocon’s race engineer appeared on the radio. Relaying in very blunt terms the wishes of the team, his team instructed Ocon to let Alonso through “very cleanly”.  Ocon attempted to fight the order, stating ” let me race at the moment”.  The team then said “I do not want you fighting Fernando”. The tone of his engineer and the frankness of the statement spoke volumes. Ocon did not respond but obeyed the order. Alonso’s radio by comparison was much calmer, Alonso asking twice if he could fight, Ocon allowing his teammate through confirms the outcome of the conversation.

"Let's make sure we let him through nice and cleanly please" 📻

Ocon: "Let me race at the moment, I will once the situation is settled a bit more" pic.twitter.com/tg0YRIcWnG

Tellingly in his post-race interview, Ocon did not confirm that he and Alonso were on good terms after the contact in the sprint race. He simply stating his teammate had “a good race’. Ocon’s body language in his Sky Sports interview showed his tension at on-track events and being called out by his team.  A fly on the wall in the Alpine debrief tonight would have been one of the hottest tickets in town if available. Alonso by comparison looked positively relaxed, no doubt because he leaves at the end of the year, and has nothing to prove.  Professional as ever, the Spaniard stated ” I’m very happy for the team”, knowing he only has one race left with Alpine. He also did not compliment his teammate or confirm the relationship between the two drivers.

This highlights the problem within Alpine at present. One driver is at war with the team and is walking away. The other constantly trying to justify his place as number one, and the de-facto team leader from next season. Ocon badly wants to beat Alonso and has not been afraid multiple times to get his elbows out this year, including Brazil.

An unstoppable force and immovable object

Ocon and Alonso have been locked in a race for supremacy in the team all season. Alonso’s switch to Aston Martin seemed to confirm tensions within the team.  The speed of the move was so quick it caught Alpine by surprise. Of course, we all know what happened afterwards with the Oscar Piastri saga that followed. This no doubt played its part in increasing tensions within the team.

Szafnauer after the race played his political cards strong. Attempting to diffuse the growing media speculation that the team ordered Ocon to let Alonso through in very blunt terms, Szafnauer said that Ocon meant he wanted to race Vettel. This sadly does not make sense. It is simply a case that after numerous near misses Szafnauer and Alpine could not take chances after its chief rival in the Constructor’s championship scored no points.

The reaction of Alpine forcing Ocon to concede to Alonso after the late Safety Car is a result of Saturday’s sprint race clash, and a similar first lap incident in Jeddah, where Ocon again forced Alonso wide. Both drivers want to be number one in the team, it has consequences for the team when tensions boil over.

Having Fernando Alonso as your teammate is not easy. Alonso is known as a challenging driver that pushes buttons on and off the track. Ocon has performed very well given this pressure. But Ocon is also no stranger to alienating teammates. He and Sergio Perez at Force India collided multiple times, with similar radio messages seen in Brazil played to both drivers. It is a case of an unstoppable force meeting an immovable object in a literal sense at Alpine, and like at Force India, Szafnauer finds himself in an impossible position attempting to play referee.

A solid day, double points for the Alpine camp 😁 pic.twitter.com/QX808AGgRx

Alonso’s dissatisfaction with the team has been simmering all season, but the exposed tensions were on display for all to see in Brazil. Alonso fraught with frustration admitted responsibility for the second collision in the sprint race, though must have been very angry at Ocon’s inability to accept responsibility for running him out of road.

Szafnauer will be glad of a change in the driver lineup for 2023 given the tensions in the team. But given Alonso’s replacement is Pierre Gasly, a driver that Ocon also does not get along with, it could be a case of being careful what you wish for. Why? You just might get more of what you wanted than originally intended.