Aero changes could “knock us off our perch”

Mercedes Technology Director Mike Elliott has given us a glimpse of what life is like behind the scenes of the seven time world championship winning team but has also admitted that there are significant aerodynamic changes this year that “could knock us off our perch.”

In a laid back interview with Michael McGrath on behalf of The Muscle Help Foundation last night, Mike answered questions from Formula One fans on Facebook Live, and FormulaNerds were also in attendance to ask him how he feels going into the 2021 season compared to previous years.

“If you ask anyone who works in Formula One, they will tell you that this time of the year, it’s a sort of mixture of nervous anticipation, dread of what you might have missed, and sort of a hope of what you’re going to find,” said Mike. “I think that’s the same every year, obviously because of Covid there’s more of a carry over car this year, but there’s still quite significant aero regulation changes, and enough that certainly could knock us off our perch, so we have just got to wait and see where we are.”

With changes also being made to the winter testing venue and the amount of track time the teams will have prior to the season opening race ion Bahrain on 28th March, we also asked Mike whether these changes will make a difference to the data collected in the test, and how testing in Bahrain instead of Barcelona will affect it.

“The advantage of Bahrain is that the conditions are pretty consistent,” he explained. “I suspect the track will be less consistent because of sand, but the weather is fairly consistent which is helpful. The problem you’ve got with very limited testing of 3-4 days is if you turn up at Barcelona and its rains throughout, you go to the first race blind, so at least with Bahrain we can get some good testing in.”

The Muscle Help Foundation are a non-profit organisation and a small national family charity, delivering highly personalised experiences in the UK known as Muscle Dreams. These experiences are specifically designed from children and young people suffering from muscular dystrophy and other neuro muscular conditions. Throughout the current lockdown, they have enabled people to stay connected and engaged through a series of “In Conversation With” style interviews, including Vicki Butler-Henderson and Anthony Davidson. 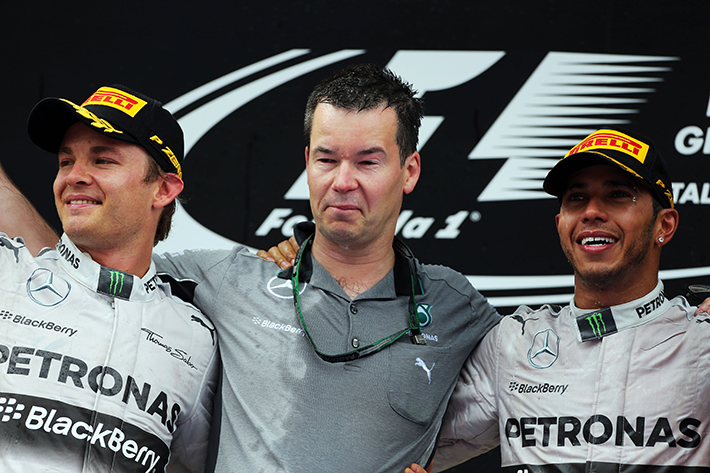 As well as revealing some personal preferences through some quick fire questions, Mike was asked who he felt was the strongest driver pairing on the grid this year.

“When you look at the teams we are going to be competing against, you have got to look at Red Bull,” he said “They will be our strongest opposition and I think in Verstappen they have got a very good driver, and I think Perez will be a strong second.  driver and will score points when Verstappen doesn’t, and support him in their bid for the constructor’s championship. Leclerc is a very good driver and it will be interesting to see how Vettel gets on at Aston Martin and whether he can reignite his career,”

“Most Mercedes people will be following what George is doing at Williams.”

We asked Mike what impact the regulation changes have on the car and the team, as this year there are minimal changes but in 2022 there are big changes coming into force.

“Regulations are a nightmare, they change and move around, there are loopholes,” he explained. “We have people who are experts in rules and they look over it and they deal with the FIA and the rest of us are trying to look for opportunities. We are trying to work out what we can do and then it’s just a process of discussion. In terms of when you get things wrong, you try to have a holistic view that builds all the bits together then you split the work up into the individual bits so people know what they’re part of it is. If you make a mistake, it’s about reporting it as early as you can and correcting it.”

Netflix has also had a huge impact on the sport, but we wanted to know the impact that is has had in the garage, and whether the operations side of things needed to change to avoid any secrets spilling out in front of the camera.

“When the directors go to the race track, they write a report back to the factory to say what’s going on, and on the Thursday of the German Grand Prix, that was the grand prix on Netflix where we were all dressed up in funny outfits because it was the anniversary of Mercedes, the first report I sent out that weekend, in the last paragraph, I said ‘We have Netflix here, we are wearing silly uniforms and it’s the anniversary, what could possibly go wrong?’ and then we had a disaster of a weekend,”

“I think the reality of the learning that came from that it is inevitable that people’s behaviour changes when they’ve got camera’s shoved in their faces, and you know where it’s going but generally I think there are cameras everywhere at a race weekend anyway, so you are careful what you are saying and where you are saying it, where you can and can’t have a conversation safely.”

FormulaNerds had one final question for him, knowing his experience not just with Mercedes but with his time at McLaren too, what has been his Formula One career highlight.

“My highlight so far has been collecting the trophy on behalf of the team, I think it’s a completely humbling experience to stand up there and collect that trophy,” said Mike. “To know that you have done that on behalf of the hundreds of people back at Brackley and at Brixworth, and that’s what you have achieved as a team. I went up in 2014 in Barcelona, so we had only just started winning and I think when you know what’s gone into it, how much loads of people have put into it, it’s quite an amazing and emotional experience.”